One of the most brutal fights in Bare Knuckle FC history will finally get a rematch.

Artem Lobov and Jason Knight are set to run it back in the main event of Bare Knuckle FC 9, which takes place on Nov. 16 at Mississippi Coast Coliseum in Biloxi, Miss.

The promotion on Wednesday announced the fight, which, like the original meeting, will be five rounds in the featherweight division.

Lobov won the first clash with Knight, taking a decision in an epic brawl at Bare Knuckle FC 5 in April. Both men were cut, bloodied and battered in the contest, with both feeling as though they were the winner.

It was Lobov who got his hand raised, though. The UFC veteran then went on to fight Paulie Malignaggi in a grudge match at Bare Knuckle FC 6. “The Russian Hammer” defeated the former boxing champ Malignaggi by decision to stay unbeaten in bare-knuckle competition.

He will look to continue that trend in the second fight with Knight, who has not competed since the initial matchup. Knight was forced out of a July bout with Leonard Garcia due to injury.

Dana White praises ‘gangster’ Maycee Barber, says he loves everything about her 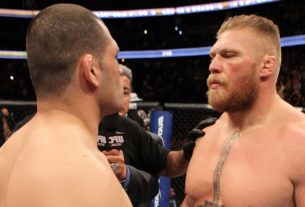 You Can Now Bet On Velasquez-Lesnar 2 In WWE