Artem Lobov and Jason Knight are running it back on Nov. 16 in Biloxi, Mississippi at the Mississippi Coast Coliseum — the exact same place and venue as their first fight.

Bare Knuckle Fighting Championship announced the rematch today. The two will also be fighting at 146-pounds, with a one-pound allowance like the first fight.

Lobov and Knight first fought back on April 6 in the main event of BKFC 5. Lobov edged out a decision win. It was both fighter’s first bit of gloveless action with BKFC.

The two also verbally agreed to a rematch on Twitter earlier this summer.

Artem Lobov also fought again in BKFC in a highly-anticipated fight against Paulie Malignaggi at BKFC 6. He won the fight by decision.

In Lobov’s MMA career, he is 14-14-1 including going 2-5 inside the Octagon. His lone wins in the UFC were against Chris Avila and Teruto Ishihara. However, the fan-favorite took on a lot of tough fights like Cub Swanson, Michael Johnson, Andre Fili, and Ryan Hall among others. He also asked for his release from the UFC.

Jason Knight, meanwhile, has only had one BFKC fight against Lobov. He was scheduled to take on UFC veteran Leonard Garcia in the main event of BKFC 7. But he had to pull out of the fight due to injury and started to campaign for the rematch.

He’s currently on a four-fight skid, which resulted in his release from the UFC. The Mississippi-native was ranked at one point following wins over Jim Alers, Dan Hooker, Alex Caceres, and Chas Skelly.

The event will be titled BKFC 9. Knight and Lobov will serve as the headliners. The fight will be available on pay-per-view.

Who do you think will win the rematch between Artem Lobov and Jason Knight, and will you be tuning in? 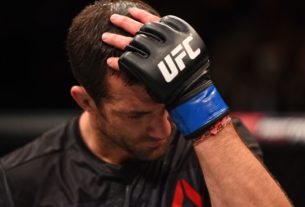 Rockhold: ‘I Have No Interest In Fighting’

Douglas Lima says dream fight is Kamaru Usman, but Gegard Mousasi will do for now

Frankie Edgar on Conor McGregor fight: ‘He can make the call’