UFC 244 takes place on Nov. 2 at Madison Square Garden, and it will mark the Ultimate Fighting Championship’s introduction of the “BMF” belt, which will be awarded to the baddest motherf****r who wins the main event between Jorge Masvidal and Nate Diaz.

Now, regardless of whether or not you’re a fan of this sort of fun being had at the highest level of MMA, I couldn’t help but notice that two of my favorite universes have come together, with the “BMF” belt conjuring up memories of Jules Winnfield’s wallet from “Pulp Fiction.”

For context: If there’s any type of film that I’ve watched more than fight tape, then it’s most certainly the marvelous world of cinema, as I was a film major in college for some time. And like any film buff who grew up in the ’90s (an era when it was much easier for young kids to get into R-rated movies/rent a UFC event on VHS), I gravitated more toward movie covers like “Reservoir Dogs” when perusing the aisles of my local Blockbuster – thus introducing me to the universe of director Quentin Tarantino.

Tarantino, like many people or promotions in MMA, is not without quirks or polarizing characteristics. That said, no matter how large the Hollywood director gets, Tarantino – as seen in his most recent release of “Once Upon a Time… In Hollywood” – still seems to use his mainstream platform to speak to audiences of the early days, which, at least in spirit, is something that hardcore MMA fans who still exist can appreciate.

In fact, you could say that Tarantino is akin to Japanese MMA in the way in which he’s not afraid to celebrate days of old through pageantry and production, as well as his recruitment of familiar faces who were thought to be past their primes. So, with both the landscapes of MMA and the film industry currently suffering from similar themes of saturation, audiences of each arena are equally hungry for substance (as is evident with dwindling box office numbers and buy rates).

Now, will the UFC’s attempt at a shakeup be a success like Tarantino’s latest flick? I honestly have no clue.

And rather than argue the merits of a fun contest between two proven commodities, I’ll instead ask you to humor me in a harmless tour of my two favorite worlds on the ensuing pages, using the format of a fantasy cast to help convey their similarities as MMA crosses into Tarantino’s universe. 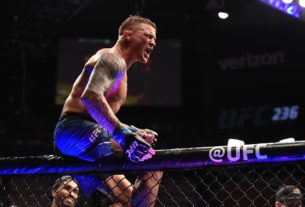 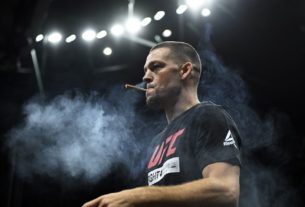 Fight Tracks: The walkout songs of UFC on ESPN+ 19 with Bruce Springsteen, AC/DC and a classic movie theme