Robert Whittaker is doubling down on his post-fight interview following his middleweight title loss to Israel Adesanya at UFC 243: he’s not going anywhere and already has a return timetable in mind.

Whittaker had his nine-fight winning streak snapped by the surging Adesanya on Saturday night at Marvel Stadium in Melbourne, Australia. “The Reaper” came out with a very aggressive game plan and the fight finished via second round knockout for the new undisputed middleweight champion.

Despite the setback, Whittaker isn’t planning on staying on the sidelines very long as he stated on his Grange TV podcast.

“I’m not looking to take a long time off,” Whittaker said. “Obviously I have to give myself the appropriate amount of rest time for my brain, but I want to get back in there, and I want to just get back to work.

“If my health is all on point, on check, February, March next year. That’s not out of the ordinary. I think that would be good.”

While Whittaker did have an impressive winning streak, he has suffered defeat in the Octagon throughout his career. The 28-year-old had suffered back-to-back losses early in his UFC tenure — while at 170 pounds — to Court McGee and Stephen Thompson. The feeling of defeat is not ideal, but it is something Whittaker has experienced before.

“People may not know this, but I’ve lost before,” Whittaker explained. “I’ve lost before, and I’ve came back better, and that’s exactly what I intend to do. I’m under no illusion that I was unbeatable; everybody can beat everybody on the given day, and I’m just going to lick my wounds, I’m going to get back on the mats on Monday, and I’m just going to start training again and try to just beat the next guy.”

Whittaker had a lot of time off between fights, and also dealt with some injuries heading into the UFC 243 event — even having to pull out of his UFC 234 title defense against Kelvin Gastelum the day of the event. The 16-month layoff, the injuries, etc., all could’ve lead to excuses that fans would understand.

There have been, and will not be, any excuses from the now former UFC middleweight champion.

What do you feel should be next for Robert Whittaker when he returns to the Octagon in 2020? 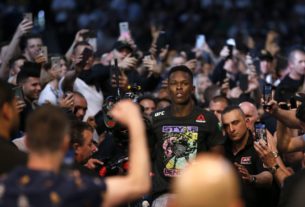 Bisping: ‘Last Stylebender’ Can Be Bigger Than McGregor