For those of you just joining us, news broke earlier this morning that former UFC strawweight champion, Joanna Jedrzejczyk, will be unable to make the 115-pound limit for her Michelle Waterson main event on ESPN+ this weekend in Tampa.

That means “Karate Hottie” will have to accept a catchweight fight in order to remain on the card, or jump ship and resurface at a later date. And if she’s having trouble finding willing opponents, a familiar face will be standing by.

“Hey UFC, if Michelle doesn’t have a fight, I’ll make 115 and fight her December 14th,” Paige VanZant wrote on Twitter. “The fight would be almost three years later to the day since the first fight.”

Waterson holds a first-round submission win over “12 Gauge” from their UFC on FOX 22 headliner back in late 2016. VanZant (8-4) has since moved up to the flyweight division, but it sounds like the opportunity to avenge a loss is just too good to pass up.

Fight week drama aside, Michelle Waterson sifts through emotions before UFC on ESPN+ 19 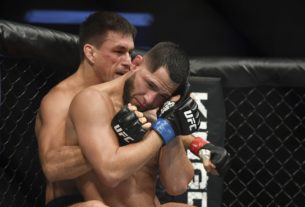