McGregor Fires Back At White: ‘Who’s Not The Man?’

White, who has worked in collaboration with McGregor over the past four years to make some of the biggest fights in combat sports history, recently said that the Irish superstar is no longer the man in charge and must now take a backseat to current UFC lightweight champion Khabib Nurmagomedov.

“Khabib is the man now,” White said. “Conor isn’t the man anymore, so Khabib gets to sit back and call the shots.”

Well, McGregor, as you may have imagined, did not take kindly to those comments. As a fighter who has been calling the shots for the past several years, “Notorious” isn’t quite ready to relinquish his power to the undefeated Russian.

Who’s not the man? Your man had that marquee event did he? More like an event in a marquee. A tent in the fucking sand it was. Keep spoofing to your self horse. Jock strap sniffer championships.

“Who’s not the man?” wrote McGregor via Twitter. “Your man had that marquee event did he? More like an event in a marquee. A tent in the fucking sand it was. Keep spoofing to your self horse. Jock strap sniffer championships.”

Khabib, who is coming off a submission win over Dustin Poirier this past September, was quick to respond:

McGregor then came back with the following message, eluding to a potential clash with “Eagle” in Russia:

“See you in Moscow,” wrote McGregor.

Remember, McGregor lost to Khabib via submission back at UFC 229 and has been trying to campaign for a rematch ever since. But with a hand injury delaying his return and Khabib uninterested in a reboot at this time, McGregor has been essentially left in the dust.

That said, “Notorious” remains the biggest draw in the sport today. He has made good business in the past amidst public spats with White and company so this time shouldn’t be any different once McGregor is ready to return.

The only difference is that Mystic Mac won’t be able to pick his preferred opponent for his anticipated UFC comeback.

Rose Namajunas Says She Lost The Passion For Fighting 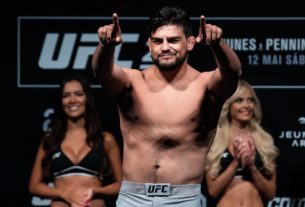 Gas Will Put Till On His Ass, Whoop Izzy