Fighter On Fighter! Breaking Down Maia AND Askren!

This is a divisive main event. Both men are specialists, experts in their craft who are devoted to fighting one style of fight. Some fans fight that appealing. There is also almost certainly going to be a lot of grappling, and waking early to watch a wrestling match in Singapore is certainly a lot to ask of the average mixed martial arts (MMA) fan.

I love weird MMA. I like plenty of fighters who many find boring (Usman vs. Covington is going to rule!). I’d like to believe that I understand the intricacies of both jiu-jitsu and wrestling fairly well. Even still, I am somewhat apprehensive about this likely 25-minute match.

All the same, let’s take a closer look at the skill set of each fighter:

Out of professional courtesy, I am going to keep this section as short and efficient as possible.

Demian Maia is the much, much better kickboxer of the two. In fact, Maia’s kickboxing is genuinely decent. Thankfully, it hasn’t been his primary focus outside of a couple years at Middleweight — the dreaded “K-1 Maia” that picked apart Dan Miller — but those years of striving to improve his stand up did produce genuine improvement.

A Southpaw, Maia is quite comfortable with straight shots down the middle (GIF). His right jab works well, particularly since fighters are frequently wary he’s going to reach out and grab their lead leg rather than stab at the face. Maia also makes good use of the left kick to the body that is commonly available for Southpaws. Maia punches with confidence, committing his weight behind the punches. This can leave him open to counters, but it can also allow him to fall forward into a takedown attempt.

That confidence is a definite difference between Maia’s striking and Askren’s kickboxing. When Maia swings, it’s usually with the intent to hurt his opponent (GIF), whereas Askren’s strikes are almost entirely a means to an end. Lastly, Maia’s footwork is pretty good! He cuts off the cage well and herds his opponents into the fence, whereas Askren tends to dive forward.

As for Askren, his path to forcing a wrestling match is less subtle. Mostly, Askren reaches out and hand-fights with his opponents. Once he can get a grip, Askren will step forward with a right hand and usually dive toward the legs/body lock.

One of Askren’s trickier tactics — one I only know about because he told a training partner of mine about it — is to throw easily kicks that are not difficult to catch. When his opponent does catch the kick, it allows Askren to latch onto his opponent and start grappling, perhaps at the cost of a punch to the face.

That tactic is a small scale example of Askren’s overall thought-process towards striking in MMA.

Askren’s nickname is “Funky,” and the man lives up to it. Askren routinely forces positions that no one other fighters end up in, and his experience in such scrambles helps guarantee that he’ll win them.

Askren is good enough at standard singles and doubles, but his end goal is more often the clinch. From the upper body clinch — well, from most wrestling positions in general — Askren is an expert at chaining together takedowns. For this combined breakdown, I’m going to break down a few individual examples, because Askren pulls off way too many different moves to effectively cover all of them.

Askren’s ability to come up from a failed shot into good position in the clinch is pretty unmatched. In MMA — particularly in organizations that allow knees to the head of a downed opponent, like One Championship — getting trapped underneath a sprawl is among the worst positions. However, Askren anticipates the sprawl and the front headlock that often accompanies it, and is ready to counter. Often, he will sit-out and successfully pop out the back door. Against Robbie Lawler (and others), he cut the corner hard and drug the arm, allowing him to continue attacking from the side. Both of these techniques frequently result in a strong angle or even back clinch for Askren.

Against Dhiego Lima, Askren countered a strong sprawl and immediate double underhooks with a lateral drop. Lima’s defensive wrestling would’ve worked on the vast, vast majority of fighters, but that’s the frustration of facing Askren.

Once Askren does secure the body lock, he’s really excellent at forcing his opponent to move and quickly finding a takedown. Again, this is a big difference between how Askren wrestles compared to most in MMA. A bad habit of most fighters is to shoot the takedown and pause, which gives opponents a chance to start defending. Askren keeps his foe off-balance, which helps prevent stalemates and damage. In the example below, note how Askren looks to off-balance his foe both by getting his hips inside and outside his foe’s knee until one works.

From top position, Askren is really dominant. Despite happily scrambling with opponents, Askren rarely ends up bottom or allows his foe to escape. Much of the time, Askren is looking to secure two-on-one control on the wrist and put in a single hook (leg ride). This is very much Folkstyle wrestling technique, and the end result is often Askren flattening his opponent into the canvas. Even if his foe does maintain a strong base, Askren can release the two-on-one grip and control the wrist with one hand, allowing him to punch with his free hand. At any point, Askren can also switch back to the body lock and look to drive his opponent flat or into mount.

One misconception about Askren is that his takedown defense is impenetrable, which simply isn’t true. Askren willingly puts himself in bad positions with the goal of scrambling into better ones, and he’s usually right in that most opponents want to break away rather than capitalize. Robbie Lawler flipped the script with his big slam (and near finish), but even in One fighter like Luis Santos were able to land takedowns when Askren over-extended himself.

Maia’s wrestling is much more simple. Over and over, Maia relies on the single-leg shot and transitions from it, which has resulted in him putting some excellent wrestlers to their butts.

After latching onto the single-leg, Maia will first attempt a dump takedown. Unlike most wrestlers, Maia will commit all of his weight to the dump, which can result in him being knocked over. However, Maia will stay on the single-leg from his back and sit back up into the takedown in a combination of wrestling and a deep half guard sweep. After that transition, he’s right back on the single leg to try again.

Should the dump/trip fail, Maia will also look to come up into the clinch. Usually, Maia looks to dig an underhook and throw it by, taking his opponent’s back. If that happens, Maia will quickly look to jump on his foe’s back (GIF).

Between his dump, trips and circling to the back off the shot, Maia creates an endless chain of transitions that always end with him working towards back mount. It simply overwhelms most of his opponents (GIF), as they may manage to outmaneuver him for a couple moves but soon end up with Maia in a dominant position.

Maia’s recent focus has been his top game, which makes the ability to control his opponent is vital. When Maia takes his opponent down, he doesn’t stay super tight. Instead, he’ll look to pass his guard immediately, often by hovering over the leg(s).

The main pass Maia relies on is the smash pass, which he’s used on damn near every fighter he’s taken down in the last few years. Because of the way Maia carries his posture and how he intends to pass, it’s very difficult for Maia’s opponent to utilize anything but an open guard. As his foe looks to create space and elevate the leg, Maia opens his knee wide and then cuts inward, pinning pinning his foe’s hips and legs to the mat (GIF). Once there, Maia applies heavy top pressure, slowly easing his way into the full mount (GIF).

Once Maia begins passing, his opponent can either choose to give up side control or attempt to explode to his feet. If he chooses the latter, Maia will more than likely transition to his back in the ensuing scramble.

Even if Maia’s opponent chooses side control, he’ll still force his way to his back. Just about all top-level jiu-jitsu fighters compete with the intent of taking the back, as it’s far and away the most effective position in jiu-jitsu. A skilled grappler can safely control, damage and eventually finish his opponent from the back mount.

Maia is already an extraordinary grappler, but he’s especially great from the back. In mixed martial arts (MMA), he’s shown that he loves to use the body triangle. When he combines this with his upper body control, Maia’s back mount becomes incredibly difficult to escape. In addition, Maia is able to control the upper body even if he loses the body triangle and his opponent stands up, leading him right into a takedown that lands him on his opponent’s back once again.

Maia’s ability to get the choke relies mostly on his opponent’s attempts to get out of his back control. If his opponent has poor defense or is hyper aggressive, Maia will find the neck. If his opponent remains calm and slowly tries to work out, Maia will ride them until the end of the round or an opportunity arises. There’s always a chance he’ll just crank the choke as well, a trick he pulled off against Rick Story (GIF).

Meanwhile, Askren has finished six of his past opponents via submission (all chokes). Most commonly, Askren will hunt for the arm-triangle choke. Whenever the top grappler transitions back-and-forth between the mount and back mount — something Askren does often as his opponent bucks and scrambles — there is always a chance to isolate the head and arm. In addition, Askren will use the claw ride to cinch up the choke, which is the exact technique we covered last week for Chris Weidman!

In Askren’s UFC debut, he secured a rare bulldog choke to controversially submit Robbie Lawler (GIF). Controversy aside, it was a very smart bit of transitional grappling. Askren was behind Lawler and attempting to work a rear naked choke, but the fence positioning did not help, as Askren wasn’t able to effectively use his hooks to control the lower body. Lawler took advantage and very nearly spun to freedom, but Askren clasped his hands at the last second.

Lawler was almost free, but Askren’s grip on the neck was tight enough that Lawler could not pull away.

Maia has admitted that his career is very nearly over, so there is fairly little on the line for the Brazilian, though he is in the running for most UFC wins. It’s a far more pivotal bout for Askren, one that could determine the 35 year old’s future with the promotion, as well as his status as a contender.

Remember that MMAmania.com will deliver LIVE round-by-round, blow-by-blow coverage of the entire UFC Fight Night 162 fight card this weekend right HERE, starting with the ESPN+“Prelims” that are scheduled to begin at 5 a.m. ET, then the main card portion that will also stream on ESPN+ at 8 a.m. ET.

To check out the latest and greatest UFC Fight Night 162: “Askren vs. Maia” news and notes be sure to hit up our comprehensive event archive right here. 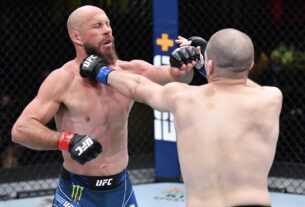 UFC Vegas 26, The Morning After: Cowboy Put Out To Pasture

Junior Dos Santos not giving up on reclaiming UFC title: ‘My will to become champion is there’