UFC welterweight standouts Nate Diaz and Jorge Masvidal squared off for the promotions new BMF Title in the headliner of tonight’s UFC 244 event.

Diaz (20-12 MMA) was returning to action for the first time since August’s UFC 241 event, where he defeated former lightweight champion Anthony Pettis by unanimous decision.

Meanwhile, Jorge Masvidal entered UFC 244 looking to earn his third straight victory inside the Octagon. Prior to squaring off with Diaz at Madison Square Garden this evening, ‘Gamebred’ was coming off back-to-back knockouts over perennial division contenders Darren Till and Ben Askren.

Tonight’s fight lived up to the hype while it lasted, as Nate Diaz and Jorge Masvidal went to war right from the opening bell. While Diaz definitely showcased his toughness during tonight’s event headliner, it was clear to most that Jorge Masvidal was well ahead on the scorecards after three rounds of action. With that said, many anticipated Diaz would turn up the volume in rounds four and five, and could thus turn the fight in his favor. Unfortunately the Stockton native would never get the opportunity, as the cageside doctor called a stop to the fight at the end of round three due to a cut over Diaz’s eye.

The unfortunate ending spawned a plethora of different fighter reactions on social media (see those here).

“Yea, I was f*cked because I had a cut from my last fight, but yea, I didn’t think they were going to stop it. I was just getting ready to get started.” Nate Diaz said. “Especially today. I had a little bit of an issue, so I couldn’t run as much as I usually do so I was like I am not even going to really push until round four. So, my gameplan was starting to kick in but he got the job done like he was supposed too. So, right on to Jorge for what he did. But I am coming back for your ass mother f*cker!”

Who would you like to see Nate Diaz fight next? Do you think a rematch with Jorge Masvidal is in order? Sound off in the comments section PENN Nation! 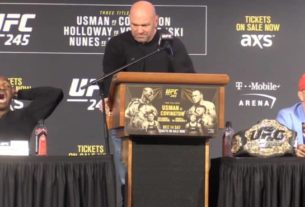