Pros react to Darren Till defeating Kelvin Gastelum at UFC 244

Former UFC welterweight title challenger Darren Till moved up a division to take on Kelvin Gastelum in the co-headliner of tonight’s UFC 244 event.

Darren Till (17-2-1 MMA) was returning to the Octagon for the first time since suffering a brutal knockout loss to Jorge Masvidal at March’s UFC event in London.

After starting his career with a perfect record of 17-0-1, ‘The Gorilla’ had since dropped his last two fights. Before being starched by ‘Gamebred’, the English fighter suffered a submission loss to then-welterweight champion Tyron Woodley at UFC 228.

Meanwhile, Kelvin Gastelum (15-4 MMA) was returning to action for the first time since suffering a unanimous decision loss to Israel Adesanya at UFC 236 this past April.

‘KG’ has picked up notable victories over Ronaldo Souza, Michael Bisping and Tim Kennedy during his time in the middleweight division.

Tonight’s UFC 244 co-main event did not exactly live up to expectations. Gastelum struggled to find his range throughout the fight and Till seemed content to just pepper him with jabs and low kicks. After fifteen minutes of action, Darren Till was awarded a split decision victory from the judges in attendance.

Check out how the pros reacted to Darren Till defeating Kelvin Gastelum at UFC 244 below:

Great job by @darrentill2 happy his snapped his 2 losses. #ufc244

Hope everyone is noticing how AWFUL these judges are. They are all over the place tonight. If this main event goes to decision people’s feelings are gonna get hurt #UFC244

Till looked even big for MW. Does he get a title shot now. Surely !!

Who would you like to see Darren Till fight next following his split decision victory over Kelvin Gastelum at tonight’s UFC 244 event in New York?

Sound off in the comments section PENN Nation!

The post Pros react to Darren Till defeating Kelvin Gastelum at UFC 244 appeared first on | BJPenn.com. 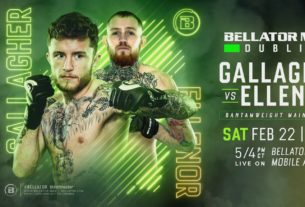