Bellator returns to its regular stomping ground of Thackerville, Okla. for Bellator 233 on Friday night. A card packed with rising contenders looks set to produce a crop of hungry potential challengers for championship gold in early 2020.

Two middleweight finishers go head-to-head in the main event, while one of the light heavyweight division’s big entertainers looks to bounce back against a dangerous debuting submission ace. There’s also a battle of women’s featherweights that could produce a future title challenger at 145 pounds, and a pair of twins looking to capture victories on the same card.

Here are our burning questions ahead of this weekend’s big show:

Which middleweight will emerge as the next big contender?

The main event in Thackerville looks set to deliver a classic grappler vs., striker matchup as dueling middleweight contenders John Salter and Costello van Steenis face off for the right to be called the middleweight division’s next emerging contender.

Salter’s form since making his Bellator debut in 2015 has been nothing short of outstanding. The North Carolina native has lost just once inside the Bellator cage – to current champion Rafael Lovato Jr. – but has otherwise been dominant as he has torn through the competition, using his dominant ground game to produce five submission finishes and one win via ground and pound TKO.

While Salter (16-4 MMA, 6-1 BMMA) has looked like the real deal on the ground, his opponent has looked every inch a contender on the feet.

Van Steenis (12-1 MMA, 4-0 BMMA) has built his reputation on finishing his opponents, and has nine stoppage wins to his name. Five of those finishes came by way to submission, but it’s more likely that the Dutchman – a protegé of former Bellator champion Gegard Mousasi – will look to keep things standing, where he’ll bid to even up his finishing record by securing a fifth victory by KO.

Will Salter be able to impose his dominant grappling game, or will van Steenis fight smart, use his own skills to keep the fight standing and punish the American on his feet?

It should be a fascinating contest. 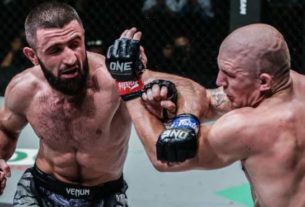 AJ McKee On Contract Status: We’ve Got To Sit Down And Talk Numbers