Skip to content
NEF co-owner explains Josh Grispi signing: ‘(He) was convicted and did his time in prison’

Josh Gripsi, former UFC and WEC fighter, is back.

On Feb. 8, Grispi (14-5 MMA) will return to action for the first time since his 2014 arrest for domestic violence when he takes on former WSOF fighter Bruce Boyington at “NEF 42: Symphony of Destruction” in Portland, Maine.

In August 2014, Grispi was arrested after what the Taunton Daily Gazette reported as a “vicious beating” of his wife, Kaitlyn Grispi. Middleboro (Mass.) police officer Richard Harvey called the attacks “the worst case of domestic abuse I’ve ever seen.”

In June 2017, a grand jury found Grispi guilty on seven charges, and he was sentenced to five-and-a-half years in the House of Corrections and five years probation.

MMA Junkie reached out to the promotion Grispi will be competing for, New England Fights, who provided comment on the signing and what they believe he brings to their organization.

According to NEF co-owner and Massachusetts attorney Nick DiSalvo, the promotion was approached by Grispi’s coach, who informed them the 31-year-old fighter would be making an MMA comeback.

DiSalvo recognized the national issue of domestic abuse and did not excuse Grispi’s past behavior. In DiSalvo’s eyes, Grispi served his time and is deemed no longer dangerous by the judicial system.

“Domestic abuse is an epidemic in our country,” DiSalvo wrote in a statement to MMA Junkie. “There is no excuse for it. It is a horrific crime. Josh was convicted and did his time in prison. There is nothing that would make us believe he has not been rehabilitated and ready to become a productive member of society. If Massachusetts courts determined he was still a threat to anyone, he would not be walking the streets right now.”

“There is never an excuse for subjecting a loved one to physical or emotional abuse. Josh was convicted and did his time in prison. He is out now and deserves the opportunity to make a living to support his children.”

DiSalvo said his dealings with Grispi have been nothing but pleasant thus far. The lightweight fighter “was nothing but respectful and acted like a gentleman to everyone he came in contact with,” DiSalvo wrote.

As far as his in-cage talents are concerned, Grispi is still a top competitor wrote DiSalvo. “He is a tremendous talent who has fought some of the toughest opponents in the sport. He has more to offer our sport before he is done.”

NEF co-owner explains Josh Grispi signing: '(He) was convicted and did his time in prison' 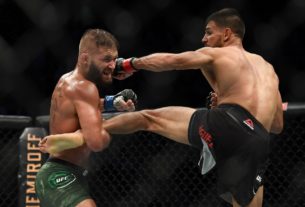 UFC Boston, The Morning After: Jeremy Stephens, Victim Of Circumstance