Ultimate Fighting Championship (UFC) was back at it again last night (Sat., Nov. 16, 2019) as UFC Fight Night 164 went down from inside inside Ibirapuera Gymnasium in Sao Paulo, Brazil.

In the main event of the evening, Jan Blachowicz narrowly edged out Ronaldo Souza via split-decision, ruining “Jacare’s” Light Heavyweight debut (relive it here). In the co-main event, Mauricio Rua and Paul Craig fought to a draw after 15 minutes of lackluster action (highlights).

Let’s face it, Jan’s win over Souza was nothing to get overly-excited about, as both men could have put in a bit more effort into their performances. So while Blachowicz got the nod, the runner up honors go to Krause. But let’s get it straight, it’s not like James’ fight against Sergio was barn-burner by any means, either. But after Krause ended the fight — and Sergio’s night — with a nasty right hand, he earned his six straight win in a highly-crowded welterweight division. Whether or not it’s good enough to get him into the top 15, remains to be seen. It was, however, good enough to earn him an extra $50,000 in post-fight bonus cash.

“Jacare’s” move up to 205-pounds was disappointing to say the least, as the Brazilian submission machine simply couldn’t muster up any offense against Jan. I mean his output was non-existent. Granted, Jan is one of the best in the division, but I would’ve liked to see a bit more out of Souza — as well as from Blachowicz — who was in desperate need of trying to make something happen in a new division after being inconsistent at Middleweight. That is now two straight losses for Souza, three of four overall. Personally, I don’t think he belongs at 205 pounds, as Middleweight is his home. Whether or not he drops back down after his loss and performance against Blachowicz, remains to be seen, but I just don’t see him finding a lot of success against the elite at 205 pounds. 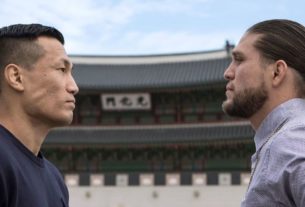 Ibraheem Yazeed, charged in Aniah Blanchard’s disappearance, to be held without bond