Ronaldo Souza was proud of his performance against Jan Blachowicz at UFC on ESPN+ 22 and believes he was wronged by the judges.

The Brazilian admitted post-fight that his 25-minute bout with Blachowicz was by no means entertaining, but given the adversity he apparently endured throughout training camp, Souza couldn’t be overly critical of his effort.

“I told the UFC I was coughing in a way that I can’t stop coughing, and this was 20 days ago,” Souza said through an interpreter. “We did a lot of exams and, first of all, I did treatment as if there was an allergy, and my doctor from Brazil here told (to do) a weird exam. … So 10 days ago was when I was diagnosed and on Monday was my last day taking antibiotics. I was going to give an interview, and when I did interviews I would start coughing and people would say, ‘What’s wrong?’ And I would say, ‘Nothing.’

“It didn’t get in my way. I was able to fight five rounds against a guy who was knocking everyone out in the light heavyweight division. I did my best to be here to fight. Unfortunately the victory didn’t come my way. It wasn’t a pretty fight. It wasn’t pretty for me, it wasn’t pretty for him, but I thought I won three rounds.”

The fight between Souza and Blachowicz was a battle of attrition. Much of it was spent with clinch work against the fence, and there were few memorable momentum swings over the course of five rounds.

Souza said he suffered a leg injury late in the fight, too, but still felt he did enough to win.

“I fought well against a top-level guy,” Souza said.” He was knocking everyone out. I was able to use my strength and put him against the fence. He said that. I wasn’t able to impose my game and take him down. I tried to stop to attack in the fourth round because he hurt my leg, so that got in my way.”

After seemingly hitting his ceiling as a middleweight, Souza moved up to 205 pounds in hopes of a fresh start. The fight didn’t go his way, leaving the 39-year-old sitting on back-to-back losses for the first time in his career.

Souza didn’t indicate this is the end for him, though. If anything, he appeared to have his spirits lifted due to the way he competed.

“I’m going to be strengthened by this,” Souza said. “It’s my first fight at light heavyweight, and I fought a guy who’s at the top, a guy who just knocked out a former champion in Luke Rockhold, and I went in there and did five rounds, and I won, but unfortunately I didn’t take it.” 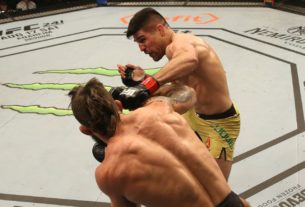