Video: Check out the rolling thunder kick that laid Ross Pearson out cold

Not many people have heard of MMA fighter Davy Gallon, but nearly everyone interested in MMA – and many that aren’t – are now familiar with the infamous rolling thunder kick he used to knock out UFC veteran Ross Pearson.

Pearson retired from the UFC in early 2019 having lost six of his last seven bouts in the Octagon. A few months later, he opted to return for the main event of Probellum 1 on his home turf in London, but things didn’t go as planned.

Little known French fighter Gallon gave Pearson a rude welcome back to the cage with his rolling thunder knockout.

It’s tough to put it into words, so you best watch the video and see for yourself.

Video: Check out the rolling thunder kick that laid Ross Pearson out cold 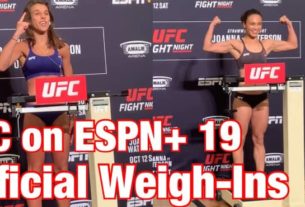 Marlon Vera calls out Jimmie Rivera: ‘I will end his career’ if failed 2017 bout is booked