Bisping: Charismatic Fury Would Be Big Business For UFC

While Tyson Fury has set the combat world buzzing by expressing his interest in jumping over to mixed martial arts (MMA), that likely won’t happen for a while, as he is still under a boxing contract with ESPN.

But that hasn’t stopped the boxing champion from starting his MMA training early, nor has it halted UFC big men from calling out the pugilist. While Dana White doesn’t see Tyson having much success inside the Octagon, he hasn’t quite ruled out the move.

According to former UFC Middleweight champion, Michael Bisping, UFC passing on Fury would be a mistake since the big man is a triple threat and would be big business for all parties involved.

“If Tyson Fury was to come over, I’m not gonna say the word ‘groom,’ but they would stagger his matchups and give him logical matchups,” Bisping said on his Believe You Me podcast (transcript by BJPenn.com).

For Bisping’s money, if UFC is looking for entertainers, “The Gypsy King” is the perfect man for the job, as he can talk shit, knock you out and sing a song post-fight.

“Listen, look at the UFC. People call it the entertainment era and Fury ties into that perfectly. The guy can talk, he can talk sh-t for days. He’s very, very funny. He can put people down, he sings on the microphone,” he added.

“Not only is he the heavyweight champion of the world but he’s massively charismatic. He’s an absolute huge star and if he can come over win a couple of fights and then get a title fight, for the UFC that’s big business. That’d be a massive, massive pay-per-view.”

Of course, “The Count” also feels should UFC take a chance on him, throwing him to the fire right of the bat won’t be wise, much like the promotion did with James Toney by giving him Randy Couture.

According to Bisping, with Daniel Cormeir set to retire in 2020, the promotion is going to need some polarizing figures to help fill the void. For now, Tyson still has plenty of work to do in the boxing arena, including a big-money rematch against Deontay Wilder sometime in 2020. 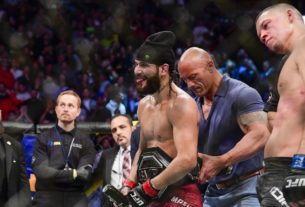