Though neither fighter will be competing Saturday night, both were on hand for Thursday’s festivities in London. The altercation appears to have stemmed from a comment that Kimbel made on an Instagram post of Gallagher with his mother.

At media day, Gallagher and Kimbel shouted expletives and threats at each other from across the room. They had to be restrained from the potential brawl that was brewing. Bellator Europe 6 headliner Michael Page and co-headliner Mike Shipman had to step in, according to MMA Junkie’s Simon Head, who was on the scene. Gallagher was so upset that, at one point, he turned on Page, who was simply trying to keep the peace.

You can watch the chaotic scene unfold in the video above.

While Kimbel doesn’t currently have a fight booked, James Gallagher is set to headline Bellator Europe 7 vs. Cal Ellenor on Feb. 22 in Dublin. 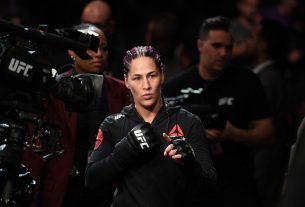 UFC On ESPN 10 Odds, Under Dogs And Best Bets!

Title Fight or Not, Robert Whittaker Would ‘Love to Run It Back’ with Israel Adesanya