And while Weili believes Jedrzejczyk is a formidable opponent, she doesn’t believe she’s the best in the division. Weili bestows that title to former champion Rose Namajunas.

“I always want to fight the best, but it is not my job to determine who the best is,” Weili told MMA Junkie in a direct message. “If you are asking me if I think Joanna is the best then the answer is no. Joanna is a worthy opponent and is among the best, but in my opinion Rose is the best martial artist. And when the time is right, it will be an honor to test my skills against hers.”

Namajunas (8-4 MMA, 6-3 UFC) was en route to a masterclass in her last outing, when she attempted to defend her title vs. Jessica Andrade at UFC 237. But a crucial mistake cost her as she latched onto a Kimura while being lifted and was unable to protect herself when she was slammed, getting knocked out in Round 2.

Despite the loss, Weili (20-1 MMA, 4-0 UFC) still sees Namajunas as the toughest test and hopes to get the opportunity to share the octagon with her in the near future. Good news for Weili is that Namajunas, who contemplated retirement after losing her belt, recently announced her intention to continue fighting.

“I think Rose is a true master and know our paths will cross,” Weili said. “I like Rose very much, and to share the octagon with her will be the true test. I look forward to seeing her return, and I wish her good health and prosperity.”

Andre Fili admits UFC 246 loss still hurts: I know I had a better fight in me 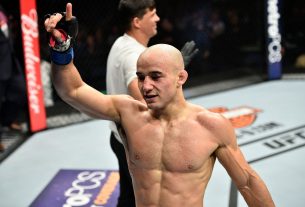 C.B. Dollaway No Longer In UFC, Fighting For RIZIN Title