Being a member of the UFC commentary team is no easy task. The commentators are on the mic for the majority of the event, which can last upwards of eight hours. Any slip up is noticed, and an error can ruin an otherwise great moment.

There are some definite perks though! Joe Rogan and Jon Anik — as well as occasional commentators Daniel Cormier, Dominick Cruz, and Paul Felder — have witnessed some incredible moments from right up close. UFC has since released the above compilation, playing some of the best knockouts of the last couple years side-by-side with the industry veterans making their calls and absolutely freaking out.

It’s a lot of fun even if you’re not a fan of the above crew — these are some killer clips!

I’m telling my kids this was @stylebender #iseeyousoonboi

This is so important for people to see, especially on social media where you have so many people using beautifying filters, and standing in front of rented cars wearing fake jewelry. Try, fall on your face, get up, learn and get after it again. That’s how you get somewhere in this crazy life. #Repost @iamtheimmortal with @Rep0stApp • • • • • • • ESSENTIAL PREREQUISITE

I guess it would be discriminatory if a USADA official simply rented an apartment next to Paulo Costa’s house.

As of November 18, fighters with the most USADA test counts in 2019:

Rico Verhoeven and Badr Hari will compete for magazine sales before they actually get a chance to punch one another.

Aljamain Sterling working on his grappling while recovering from wrist surgery:

A post shared by Amateur Boxing Highlights (@amateurboxinghighlights) on Nov 21, 2019 at 8:54pm PST

I’ve not previously seen as SUMO! knockout (sort of).

This just a brutal series of uppercuts:

Nong-O Gaiyanghadao (261-54-1) dominates the third defense of his ONE BW Muay Thai strap, numbing Saemapetch Fairtex’s body with kicks, uncorking counters, and exploiting the clinch en route to a vicious, fourth-round KO! He is 6-0 with the org. #ONEChampionship #EdgeOfGreatness pic.twitter.com/SVUNCEartZ

Crossing the ankles and extending is another way to finish the triangle choke position, particularly useful against opponents with especially broad shoulders.

What’s your name for this

This clip is wild on several levels.

Buddy behind him got the best reaction time on earth

Midnight Music: Is there a better art punk song? I think not. 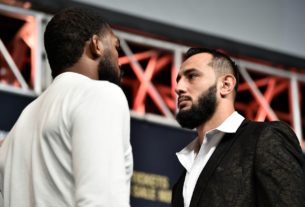 With Raulian Paiva out, Zhalgas Zhumagulov steps in to face Amir Albazi at UFC’s Nov. 28 event