Heavyweight boxing superstar Deontay Wilder called out rival Tyson Fury for a rematch, and he hopes the fight takes place next February.

Wilder took on Luis Ortiz in a rematch on Saturday at MGM Grand Garden Arena in Las Vegas, Nevada. Like in their first fight in March 2018, Wilder was able to get the better of Ortiz and this time knocked him out in the seventh round to defend the WBC heavyweight title. After winning the fight, Wilder took the microphone and called out Fury for a rematch.

Check out the message Wilder sent Fury below (h/t MMA India on Twitter).

“Well my next (opponent), of course, we have Tyson Fury in a rematch next. When it’s settled it’s set to be done in February. So we’ll see how that goes. And then after that, I’m looking for a unification bout. I want one champion, one face, one name, and he goes by the name of Deontay Wilder. The heavyweight division is too small to have so many belts lingering around. There should be just one champion. It’s too confusing for the fans, you know? And I think I’m the perfect man for that job,” Wilder said.

Wilder and Fury first met in December 2018 and fought back-and-forth for 12 rounds in an absolute classic. At the end of the 12 rounds, the fight was declared a split draw and Wilder held onto his WBC heavyweight title. Since then, Fury has won back-to-back fights over Otto Wallin and Tom Schwarz, while Wilder defeated Dominic Breazeale. Fans have been clamoring for this rematch for a while now and it appears both boxers want it, too, so at this point it appears it’s just a matter of getting the contracts signed on the dotted line.

Who would you pick in a rematch between Deontay Wilder and Tyson Fury?

Alexander Hernandez believes he might have contracted coronavirus from head coach 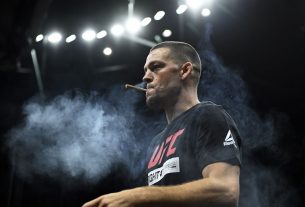 Report: Nearly Half Of All MMA Fighters Use Marijuana