Darren Till proclaims himself the ‘money man’ in the middleweight division

After picking up a decision win over Kelvin Gastelum at UFC 244, former UFC welterweight title challenger Darren Till is now a top-5 middleweight contender.

To say he’s feeling confident in the wake of this division change would be an understatement.

In a recent interview with BT Sport, Till shared his belief that he’s moved past the losses that ended his time in the welterweight division, and evolved into the ‘money man’ at middleweight.

He believes he’s an even more sought-after opponent than UFC middleweight champion Israel Adesanya — even if it’s just because he’s viewed as an easy matchup.

“The people forget the fighter I was before I got knocked out,” Till said (via MMA Junkie). “Forget the [Tyron] Woodley fight. People forget the fighter I was, what I done to the best striker in the UFC, Stephen Thompson, where I calm and calculatedly beat him, nearly knocked him out. Look at the performance he’s just had, or before that (Donald Cerrone), or before that all the European stars I was just taking out, or before that when I was in Brazil just taking names, or even before that. So now they’re all just calling me out. I’m the money man in the division.

“Forget the champion: it’s me,” Till continued. “They all know what they want. Maybe they’re all seeing it as easy money – not a chance. Not a chance, mate.”

Darren Till has recently been linked to matchups with former UFC middleweight champ Robert Whittaker, and top contenders Jared Cannonier and Yoel Romero. Now viewing himself as the middleweight money man, he says he’ll decide which matchup he likes best.

“I’ll pick,” Till said. “I’ll just see who I want to fight because they’re all calling me out for a reason, so obviously I’m holding all the chips.”

Suffice it to say that moving to middleweight has done wonders for Till’s confidence. Who do you want to see him fight next?

The post Darren Till proclaims himself the ‘money man’ in the middleweight division appeared first on | BJPenn.com.

Spinning Back Clique: What do we think of Greg Hardy now? 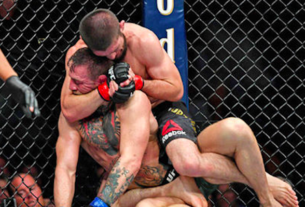 PHOTO | Jose Aldo looks shredded in cut down to bantamweight