Sterling Not Feeling The Old Blood Invasion At Bantamweight

Furthermore, ex-Lightweight champion, Frankie Edgar, also finalized his plans to compete at 135 pounds, as he will face Cory Sandhagen in the co-main event of UFC Fight Night 167 on January 25, 2020 after spending the last few years competing at 145 pounds. And we can’t forget the return of Urijah Faber, who ended his retirement earlier this year by knocking out Ricky Simon in under a minute (see it).

While fight fans are eager to see just how those vets and former champions do moving forward, some aren’t too happy with them invading the division. Chief among them is top 135-pound contender Aljamain Sterling, who feels they are simply trying to score another huge title fight before it’s too late.

“Two belts in two different weight classes would be historic, but they’re old in fight years, they’re older in age, and they’re fighting guys who are almost a decade younger than them – so it’s going to be very interesting to see how they do,” Sterling said in during an appearance on UFC Unfiltered visa MMA Junkie.

“I’m not wishing them any type of ill will, but at the same time, I just wish they hug each other for 15 minutes and have boring fights,” he added.

“I don’t really understand or can make much sense out of it. I’m like, ‘You guys established yourselves as (1)45-ers – to come down at that age, that late in your career, it doesn’t make a ton of sense to me.’ It’s the last Hail Mary. It’s the last hurrah for another title shot and one more chance for them to become a champion again in another weight class.”

Furthermore, Sterling feels with their names already being established in the fight game, it could prevent “real” Bantamweight contenders from getting their title shots. That’s why he hopes they fizzle in their respective debuts, when referring to Aldo and Edgar.

“I hope all the guys coming down in weight class have an egg of a fight, and leave us real bantamweights who’ve been here, putting in the work, to get a shot,” Sterling said. “I hope they have boring fights so our last fights stick out the most. All the old guys coming down – Faber, Edgar, Aldo – I hope they just get tired and just hug each other.”

Interestingly enough, Sterling could have had a say in Edgar’s progression, or lack thereof, at 135 pounds, as he was rumored to be taking on “The Answer” earlier this year before an injury forced “Funk Master” to the rehab room.

Ranked No. 2 in the world, Sterling is currently riding a nice four fight win streak and is the top option to face division king, Henry Cejudo, upon his return. Especially since only Marlon Moraes — the only other man ranked ahead of him — recently lost to “Triple C.”

Johnny Walker says he doesn’t feel the motivation to fight: ‘I was sad with a lot of problems’ 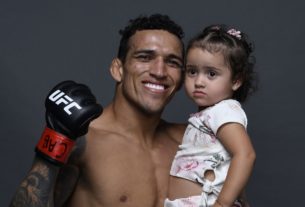 Oliveira Calls For Another Fight In December