LOS ANGELES – Despite throwing down twice with Jose Aldo, Max Holloway appears to have nothing but respect for the former champion.

During a media day event Thursday in Los Angeles, UFC featherweight champ Holloway was asked about former 145-pound titleholder Aldo’s decision to move down to bantamweight for his next bout.

Aldo fights Marlon Moraes at UFC 245 next week. Holloway defends his featherweight title on the same card against Alexander Volkanovski in the co-main event at T-Mobile Arena in Las Vegas.

And while Holloway admitted he was a little surprised at first, he thinks Aldo can make the weight if he’s disciplined.

Max Holloway: Conor McGregor rematch can happen if he wants to be great again

“I was like, ‘Thank God I don’t have to face him again,’” Holloway said. “That guy’s a beast. He’s strong. I was kind of blown away at first. I was like, ‘Oh, he’s going to make ’35, and it’s possible. It’s just changing your diet and this and that.’ So I wish nothing but the best for him. But we’ll see what happens.

“I’m excited. He’s fighting, in my eyes – it’s like fighting a clone. Him and Marlon are like the same, and they’re both Brazilians. I’m excited for that fight, so I can’t wait to watch that fight, too.”

Photos: Jose Aldo through the years 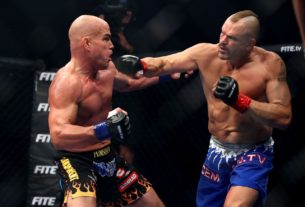 Liddell Vs Ortiz Rivalry Gets ‘30 for 30’ Treatment

UFC to Return to London on March 21