In a crowded MMA landscape, where it’s easy to be swamped by the sheer number of fights on offer, a bout with a real back story can prove crucial to help pull in the fans and attract additional interest leading into an event. And English bantamweight Nathaniel Wood thinks he has the perfect matchup in mind for UFC London on March 21.

“Marlon Vera is the fight I’m pushing for,” Wood (16-3 MMA, 3-0 UFC) told MMA Junkie. “As of yet, I’ve got no fight booked. They haven’t even said that I’m definitely on the London card or not. So it’s something I’m pushing for, and hopefully they’ll give it to me.”

The choice of Vera (17-5-1 MMA, 9-4 UFC) is no accident. The Ecuadorian bantamweight is currently on a tear, riding a five-fight, five-finish, win streak. He’s never been stopped and he’s currently listed at No. 14 in the UFC’s official 135-pound rankings.

But besides the statistical challenge of facing a ranked opponent riding an impressive win streak, Wood has another reason for wanting to face Vera. He retired his coach.

March 18, 2017 was supposed to be a red-letter day for Brad Pickett. The beloved Londoner had announced that his fight at UFC Fight Night 108 in his home town would be his last, and fight week was packed with special tributes to the man known throughout the MMA world as “One Punch.”

Walking out to songs from Cockney pub band “Chas n’ Dave,” wearing his suspenders and trademark trilby hat – a nod to his grandfather, a bare-knuckle boxer back in the 1920s – Pickett was instantly recognizable. And his all-action performances inside the cage often left a lasting impression, too as he became one of the most popular fighters to come out of the U.K.

For his final fight, Pickett was all set to face Henry Briones, but when the Mexican pulled out of the contest just a week away from the fight, there was real concern that Pickett’s dream farewell at The O2 Arena would be scrapped. But a replacement was found in the form of Vera, who flew in to London and ensured the English veteran had the opportunity to compete for the final time in front of his own fans.

“I haven’t watched it for some time. I’ll probably go back and watch it again soon,” Pickett told me. “But I was winning that fight the whole time. And also, without wanting to sound too flash or whatever, I was really comfortable in the fight. If anything, I was taking it quite easy. I was just making sure I didn’t do anything crazy and making sure I won my last fight.”

Then, with just over a minute remaining, the unthinkable happened. Vera produced a picture-perfect head kick that connected flush to Pickett’s temple, sending him crashing to the canvas. Clearly scrambled, the “One Punch” tried to rally, but Vera swarmed the downed Brit with strikes to force the stoppage with just 70 seconds of the bout remaining.

In an instant, the electric atmosphere inside The O2 evaporated and was replaced by stunned silence. Eventually, the crowd rose to salute their fallen hero as he laid down his famous hat in the center of the octagon and left for the final time as a professional MMA fighter.

One of those stunned bystanders was Wood, who at the time was a rising star on the UK domestic scene and part of Pickett’s London gym at Team Titan. “Vera came in on short notice, and as far as I was concerned, Brad was doing perfectly fine,” he remembered. “Then, in the final round, he got caught with a head kick, which knocked him out.”

The rise of “The Prospect”

In the months that followed, Wood, with Pickett in his corner, went on to win four fights for European promotion Cage Warriors. All four were by KO, with the last three coming in the first round, as he captured the bantamweight title and made two spectacular title defenses. It saw him earn a contract with the UFC where, after his submission victory over Johnny Eduardo on his octagon debut, Wood gave an interesting angle to his preferred career progression.

“I got signed by the UFC, got my fight, and I had my little hit list – just a little bit of fun – where I said I wanted to avenge all my coach’s losses,” he said.

“Vera was one of the only ones to get back (to me). You could tell he didn’t find it that funny. He got really upset about it and started saying things like: ‘I knocked your coach out! I’ll do the same to you!’ and all that sort of stuff, which to be honest I found quite funny. It’s all fun and games to me.”

But now, after following his four successive knockouts in Cage Warriors with a hat-trick of consecutive submission finishes in the UFC, Wood is ready for ranked opposition and sees Vera in London as the ideal bout to catapult himself toward the division’s big names.

A no-brainer for UFC London?

Wood’s interaction with Vera after his UFC debut planted the seed for a matchup that both he and Pickett think would make a perfect booking for UFC London in March 2020.

It would take both Vera and Pickett back to the scene of their dramatic meeting back in 2017, while giving Wood the opportunity to take on the man who sent his mentor into retirement on a knockout loss.

“I’ve got no hatred towards the guy, but that makes it an exciting fight now,” said Wood. “Obviously every fight is important to me – I always train my hardest. But having that little bit of back and forth and the story behind it where he beat my coach, that would definitely make me get up out of bed quicker for training. For me, there’s a story to it, the student avenging his master. It’s just cool. It’s something you could imagine seeing in a movie. So I really like that idea.”

Pickett agrees, but stopped short of saying that revenge was a major aspect of the matchup. He just thinks it’s a slam-dunk matchmaking opportunity for the UFC.

“Revenge is a very powerful word that can be thrown around and used in the wrong context,” he explained. “I have nothing against Marlon Vera in any way whatsoever – I wish him all the best.

“In a weird way, when he beat me I was happy for him because he got some extra money for his family, and we know the backstory that he’s had with his children. It was very moving. So it’s not revenge, but it is a good fight. And if you make fights, you sometimes need ones that have an added story behind them to help make them even more exciting.”

And given the form of both men, plus the fact that Vera responded to Wood’s original comment about avenging Pickett’s losses, “The Prospect” says the fight works from both a divisional standpoint and a fan interest perspective.

“I’ve never had an opponent talk (expletive) to me before, so the fact he has makes for an exciting fight,” he explained. “I definitely think that he’s been doing well – I believe he’s on a five-fight win streak – so he’s definitely a step up in competition. But the guy he’s just beat (Andre Ewell), I had already beaten a year ago. So to me, it’s not an unrealistic matchup. We’re ranked around the same sort of level and he’s always game to fight, so I’d like to think he’d come to London and we could get it on.”

“I think Marlon Vera, just the story behind everything, it’s a no-brainer,” said Pickett. “It’s an easy fight to promote for the UFC. With the story of Vera coming in and beating me in my retirement fight, and Nathaniel coming up and fighting him, I just think it’s a really good selling story. I’m a matchmaker for my shows, and, for me, this just makes so much sense. It won’t be a hard sell, and it could easily go very high up the card, like a co-main underneath someone like Darren Till, for example.”

If the fight does get made, it will put Pickett in an unusual position. As Wood’s coach, he will work with his fighter to put together a gameplan for the fight, and will spend hours pouring over fight footage to identify tendencies and openings. The difference for this fight would be that Pickett would have to relive one of the most emotional moments of his career. But the former UFC and WEC fighter said he is happy to put his own career in the rear-view mirror to help further the career of the fighters he now trains.

And “One Punch” said that if Vera agrees to return to London for the fight, he thinks Wood has the skills, and the temperament, to defeat “Chito” and move toward the best of the bantamweight division in 2020.

“I’ve felt this guy, I know this guy a lot, and I know what he’s capable of,” he said of Vera. “And, of course, I know what Nathaniel’s capable of. And I 100% believe Nathaniel has everything he needs to beat this guy.” 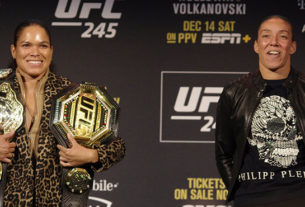