Nevertheless, “The Reem” is still going strong 58 fights into his MMA career which has seen him take on the best the sport has to offer in various weight classes. With Daniel Cormier set to retire this year, the 265-pound weight class will be down one more big man, which means getting to the big dance won’t have to take five or six wins. If Overeem can take out Rozenstruik impressively, it will shoot him up the rankings, and perhaps put him one more win away from a title shot.

Rozenstruik, meanwhile, is looking to capitalize on his latest opportunity. A perfect 9-0 thus far, 3-0 inside the Octagon, Jairzinho was last seen knocking out Andrei Arlovski in the very first round at UFC 244 (see it), giving him his eighth KO/TKO win. That means the big man can crack, and if Overeem isn’t careful, he could be seeing stars. A victory over Alistair won’t necessarily put Jairzinho in a title shot position, but it will give him the boost and confidence he needs to start eyeing bigger and bigger matchups.

Cynthia Calvillo missed weight (yet again) giving her another bad mark on her UFC run. She came into the promotion with the backing of Dana White, and while she is 5-1 so far inside the eight-sided cage, missing weight isn’t a good look, and it can make you fall out of favor with the higher-ups rather quickly. Now, she needs a win more than ever to make up for her scale fail. Thankfully, her opponent, Marina Rodriguez, agreed to go on with the fight, taking a good chunk of Cynthia’s fight purse, as well. Marina is undefeated so far in her career (12-0-1, 2-0-1 UFC) and a win over Calvillo will be a huge confidence builder.

There really isn’t a whole lot to complain about here. It’s a solid card with solid matchups all the way around, which is something we haven’t seen over the last few Fight Night events. But since this card will be airing on big ESPN, the promotion needed to up its game. And it did.

The original main event was set to be Overeem taking on Walt Harris, but after Walt’s stepdaughter went missing, he had to obviously step away. Unfortunately, in the worst case scenario imaginable, Aniah Blanchard was found dead a few weeks later, while those responsible are all behind bars at the moment.

Cortney Casey and Virna Jandiroba were booked to throw down in women’s Strawweight action, but Casey was forced out for undisclosed reasons. Livia Renata Souza, who stepped in to replace Casey, ultimately had to bow out herself and was replaced Mallory Martin.

Carlos Condit was all set to make his return to action, but a detached retina forced him out of his scheduled Welterweight bout against Mickey Gall, who was removed from the card altogether.

Claudia Gadelha was initially set to face Cynthia Calvillo at the event, but she was forced to withdraw with a broken finger and was replaced by Marina Rodriguez.

All of the newcomers this weekend will be making their official Octagon debuts after participating in Dana White’s Tuesday Night Contender Series (DWTNCS).

Up first is Jacob Kilburn, who actually came up short in his DWTNCS bout against Bobby Moffett. But after winning two straight on the regional scene, he got the call up to face Billy Quarantillo, another DWTNCS alum.

Indeed, Billy — another newcomer — won his fight on the show, which led to a straight shot to the bright lights of UFC. He is coming in hot with five-straight wins, and is looking to keep his momentum going with an impressive showing.

Joe Solecki defeated James Wallace on Season 3 of the show, giving him his third-straight win and a shot at the big leagues. His first challenge will be against longtime veteran, Matt Wiman, who is hungry for a win after coming up short against Luis Pena in his last outing.

Mallory Martin was also successful in her fight on the “Contender Series,” but she took another fight under the Invicta FC banner — which she won — before she got her shot inside the Octagon. Now, she will look to show she is a force to be reckoned with in the women’s Strawweight division when she faces off against Virna Jandiroba.

How The ‘Prelims’ Look:

The headlining bout of the “prelims” will see former 170-pound title contender, Thiago Alves, take on Tim Means. This will be “Pitbull’s” last fight on his UFC contract, which means he will test the free agency waters since he didn’t re-up with the Endeavor-owned promotion. He will have to score a big win over Means, as going to a new promoter on a two-fight losing streak won’t get him the lucrative contract he wants.

Also, Bryce Mitchell will make his long-awaited return after nearly having his nuts ripped off in a bizarre power drill accident (read all about it here), which sent him to the sidelines for longer than he would have liked. “Thug Nasty” will face Matt Sayles, who is eying his second-straight win inside the Octagon.

Also, longtime UFC veteran, Matt Wiman, will return for his second fight this year after a previous hiatus which saw him sit out for a whopping five years. “Handsome” will look to get back into the win column when he faces newcomer, Joe Salecki, who is riding a three-fight win streak.

To learn more about all of the “prelim” action click here and here.

Who Needs A Win Badly:

Ben Rothwell hasn’t had the best run as of late, losing three straight to Andrei Arlovski, Blagoy Ivanov and Junior dos Santos. “Big Ben” will look to turn it around when he takes on Stefan Struve in main card action. A fourth loss won’t do the big man any favors, though getting cut from the 265-pound weight class is unlikely, as the division needs as many bodies as it can get at the moment. Still, Rothwell needs a win in the worst way if he wants to remain somewhat in the mix.

The card is pretty decent, and the main and co-main events should deliver. But the rest of the main card is pretty interesting, as well. In more big man action, Ben Rothwell will look to get a much-needed win against Stefan Struve, who ended his brief retirement from the fight game earlier this year. Look, neither man is near a shot at the division title, but a win is still crucial for both to remain in the mix. Struve is just 1-3 in his last four outings, while “Big Ben” has dropped three straight.

Also, Aspen Ladd will look to bounce back after suffering the first loss of her pro career at the hands of Germaine de Randamie via knockout (recap). In her way is Yana Kunitskaya, who is fighting with a ton of confidence at the moment with two-straight wins. in fact, her lone loss inside the Octagon came in her debut against Cris Cyborg, which is nothing to be sad over, as Cris is still one of the most feared and dangerous strikers in the game.

Furthermore, Cody Stamann will look for back-to-back wins when he faces Song Yadong in Bantamweight action. Song is scorching hot with seven-straight pro wins, including going 4-0 inside the Octagon. These two talented 135-pounders are looking to move up the ladder in a division that has a few newcomers by the names of Jose Aldo and Frankie Edgar.

Two more men looking to get in the mix at 135 pounds are Rob Font and Ricky Simon, who will collide in the opening bout of the main card. Simon was last seen getting his clock cleaned by Urijah Faber, ending his eight-fight win streak in the process. Font, meanwhile, is coming off a big win over Sergio Pettis.

*Fight card, bout order and the amount of matches subject to change. 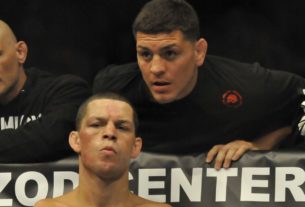 Nick Diaz Calls Out Jorge Masvidal Again: ‘Give The Fans That Real S–t’