Reigning UFC light heavyweight champion Jon Jones and top contender Dominick Reyes came together yesterday (Fri., Dec. 13, 2019) for UFC 247’s pre-fight press conference in Las Vegas, Nevada. The two men will meet at UFC 247 on Feb. 8 live on ESPN+ PPV from inside Toyota Center in Houston, Texas, as they square off in the main event for the undisputed 205-pound crown.

While Jones and Reyes have been somewhat respectful since their matchup was made official last month, the two light heavyweights got a little testy during yesterday’s press conference. Nothing got too out of hand but the blood seemed to boil a little more once Jones and Reyes started to answer some questions about their upcoming fight.

If you didn’t catch the action yesterday check out the full fight video highlights below:

In addition to the back-and-forth banter on the microphone both fighters came together for their first official staredown. Reyes stood tall as he approached Jones on stage before the champion started to talk some trash. “Devastator” responded in kind and UFC president Dana White had to step in between the two to avoid any potential physical contact.

Pretty intense stuff. Check it out in the above video player courtesy of UFC.

With less than two months to go before Jones puts his title on the line against Reyes the two fighters have already started to form a nice rivalry. It’s unlikely to surpass that of Jones vs. Cormier or Jones vs. Gustafsson, but Reyes is a talented, young, athletic, and physically imposing contender who is going to keep Jones up many nights leading up to their title fight. 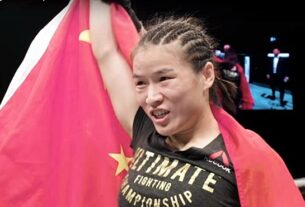 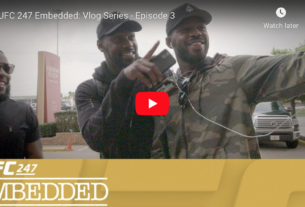 Jones Declares Beef With Cormier ‘All Over’