On Wednesday, the Nevada State Athletic Commission (NSAC) held their monthly meeting in Las Vegas. Hearings for five PFL fighters were part of the agenda. Among them was Nicholson.

According to the NSAC, Nicholson recently tested positive for multiple anabolic steroids: drostanolone, nandrolone and trenbolone. The failed test stems from his Oct. 31 loss against Francimar Barroso at PFL 2019, Playoffs 3.

The commission stated Nicholson elected not to respond to the complaint filed by NSAC director Bob Bennett on Nov. 25. Nicholson was not in attendance for Wednesday’s meeting, nor did he elect to call in via phone.

As a result of the test and subsequent lack of cooperation, Nicholson was suspended four years by the NSAC and fined 60 percent of his fight night purse ($15,000). An additional fine equaling $363.40 was added on, to pay for the commission’s legal fees.

According to the commission, the maximum sanction for a first-time offender is 24 months and a 30 percent fine. However, the NSAC interpreted Nicholson committing multiple anti-doping offenses under the umbrella of “aggravating circumstances.”

The application of the aggravated circumstances designation allow for up to, but not more than twice the maximum suspension and/or fine for an offense. 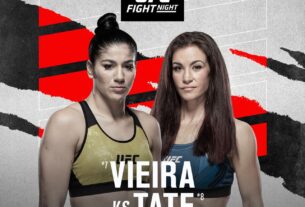 Up Next! Vieira Battles Tate In Las Vegas! 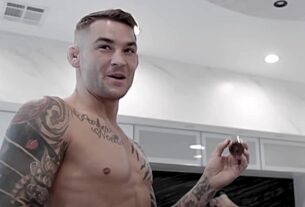