“The Reem” suffered the injury at the hands of Jairzinho Rozenstruik. The heavyweights collided in the main event of UFC Washington on December 7. The undefeated Rozenstruik filled on short notice for Walt Harris, who had to withdraw from the bout with Overeem due to the tragic death of his step-daughter.

In the headlining fight, Overeem was well ahead on the judge’s scorecards, but that all changed in the final seconds of round five, as his opponent uncorked a fight-ending punch. The punch also busted open Overeem’s lip.

Despite the gruesome injury that split the Overeem’s lip wide open, the 39-year old remained a good sport and gave credit to his opponent.

Getting stitched up. Lip not to sexy at the moment.. a little bit a fast stoppage if u ask me – but hope u guys enjoyed the fight

“Getting stitched up. Lip not to sexy at the moment.. a little bit a fast stoppage if u ask me – but hope u guys enjoyed the fight” – Alistair Overeem on Twitter.

After having surgery to rectify the damage inflicted, Overeem reflected on the fight.

“It was a nice fight,” Overeem said in the clip posted by ESPN.

“It was a good scrap. I was winning all rounds, just doing my thing. Too fast of a stoppage if you ask me. I was not out, I was knocked down, getting right back up.”

The shocking victory maintained Rozenstruik’s undefeated record and pushed him up to No. 5 in the UFC heavyweight rankings. Overeem, meanwhile, currently sits at No 8.

Overeem, on the other hand, will need to heal up, then decide how to proceed with his legendary MMA career.

Who do you want to see Alistair Overeem fight when he’s healthy? Make your pick in the comments section down below.

How would they do in MMA? ‘Bloodsport’ fighters, ranked 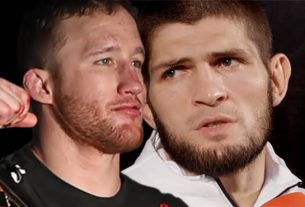