Cerrone Wants To ‘Stand And Throw Down’ With Best McGregor Ever

Donald Cerrone has put in the work to deserve his massive welterweight fight with Conor McGregor next month at UFC 246 in Las Vegas. After all, the nine-year UFC vet holds the record for most wins, finishes, and post-fight bonuses in UFC history.

While Cerrone is coming off back-to-back knockout losses to Tony Ferguson and Justin Gaethje, “Cowboy” is still at a point in his career in which he has the skill set and finishing ability to beat anybody the promotion throws in front of him. That includes McGregor, who will be making his return to the Octagon after getting submitted by Khabib Nurmagomedov last year.

This is a tremendous opportunity for Cerrone as a handful of fighters were battling for the right to welcome “Notorious” back to the cage. Even though “Cowboy” has the ability to take McGregor down and threaten him with submissions, the fan favorite fighter is more than happy to keep things standing and give the viewers want they want (which is the reason UFC picked Cerrone in the first place).

“I’m going to go out there and stand up with him because that’s what everyone wants to see,” Cerrone told MMA Junkie. “Someone said earlier that’s like fighting not to win almost, but hell no. I’d rather go down in history as having the greatest fight ever and losing than fighting to just win and winning. I’m going out there to put on the line and throw down and give everyone what they want to see. To me, that’s what I want my legacy to be. I don’t want to be the guy that took the easy way and just ran the whole fight and tried to point fight. Hell, no. I’m going to stand and try to throw down.”

Cerrone, 36, has headlined five out of his last eight UFC appearances so it’s unlikely that fighting McGregor atop one of the biggest cards of 2020 will be too big for “Cowboy” to handle. Instead, Cerrone will have to focus completely on the fight itself, as McGregor is eager to return to elite form and rack off three memorable victories over the next 12 months.

“(I’m expecting) the same hungry kid there’s always been,” Cerrone said of McGregor. “He’s coming to knock my head off. There’s a lot weighing on this fight so I’m probably going to get the best Conor McGregor out there.”

Should Cerrone take out McGregor and hand him just his third Octagon loss to date the promotion will likely set “Cowboy” up for a massive fight this coming summer. That could end up being a title shot against Nurmagomedov or a potential showdown with streaking superstar Jorge Masvidal, which are two matchups McGregor is eyeing for himself. 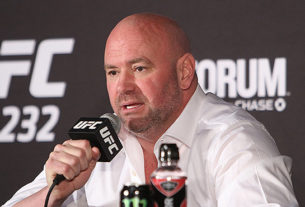