Ultimate Fighting Championship (UFC) is gearing up to stage its first event of the new year, as UFC 246 is set to go down from inside T-Mobile Arena this Saturday night (Jan. 18, 2020) in Las Vegas, Nevada.

Conor is looking to score his first win in mixed marital arts (MMA) in over three years, as his last victory came against Eddie Alvarez at UFC 205 back in 2016. For Cerrone, meanwhile, it’s his chance to get back in the win column after suffering two straight losses. Plus, a win over “Notorious” gives him one of the biggest wins of his career, not to mention he’ll be collecting his biggest payday to date, as well.

Before all of the action goes down, check out the behind-the-scenes action of fight week thanks to the ever-present cameras of “Embedded,” which captures all of the combatants putting in their preparations. From the official YouTube description.

In the co-main event, Holly Holm will rematch Raquel Pennington after initially defeating her at UFC 184 five years ago, while Anthony Pettis drops back down to Lightweight to face Carlos Diego Ferreira.

Remember that MMAmania.com will deliver LIVE round-by-round, blow-by-blow coverage of the entire UFC 246 fight card this weekend RIGHT HERE, starting with the Fight Pass/ESPN+ “Prelims” matches online, which are scheduled to begin at 6 p.m. ET, then the remaining undercard balance on ESPN at 8 p.m. ET, before the PPV main card start time at 10 p.m. ET on ESPN+.

To check out the latest and greatest “McGregor vs. Cerrone” news and notes be sure to hit up our comprehensive event archive right here. For the entire UFC 246 fight card and PPV line up click here. 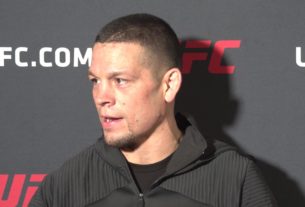 Nate Diaz: ‘I’ve Been The Best For A Long Time’

MMA’s week out of the cage: Jon Jones reacts to getting No. 1 pound-for-pound in UFC rankings