Conor McGregor says there has been talks about boxing Manny Pacquiao

Conor McGregor may be getting back into boxing.

McGregor made his professional boxing debut against Floyd Mayweather in the summer of 2017 where he lost by TKO. Yet, the Irishman won some rounds and had some success which has encouraged him to look for another match. And, it appears he has found his opponent as he revealed talks have begun with Manny Pacquiao for a boxing match.

“I would be open to other boxing bouts. You know, Manny [Pacquiao]. We’re actually close to signing Manny,” McGregor said on Ariel Helwani’s MMA Show. “There’s been talks about the Manny fight as well.”

McGregor wouldn’t go into much detail but says an offer has been made to the boxing legend. And, he revealed Pacquiao is not the only boxer he is interested in fighting as he says a bout with Paulie Malignaggi will happen.

“Very much so. And then the Paulie [Malignaggi] fight. I’d like to box Paulie. I want to box again,” he explained. “I will box again, I will get a boxing world title.”

Manny Pacquiao is 62-7-2 as a pro and riding a three-fight winning streak. In his last fight, he beat Keith Thurman by decision to win the WBA (Super) welterweight title, and before that, edged out a decision over Adrien Broner to retain his WBA welterweight title.

The 41-year-old was considered one of the top pound-for-pound boxers and his biggest fight came in 2015 when he fought Floyd Mayweather to a decision but lost.

Conor McGregor, meanwhile, is set to return to the Octagon in the main event of UFC 246 this weekend against Donald Cerrone. After that, he has made it known he wants to rematch Khabib Nurmagomedov. So, when this boxing match against Pacquiao will happen is to be seen.

Do you think we will ever see Conor McGregor box Manny Pacquiao? And, who do you think will win? Sound off in the comment section, PENN Nation!

The post Conor McGregor says there has been talks about boxing Manny Pacquiao appeared first on | BJPenn.com. 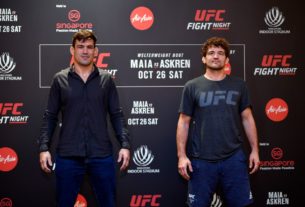