Conor McGregor and Donald Cerrone will kick off the 2020 UFC pay-per-view schedule Jan. 18 when they headline UFC 246 in Las Vegas. The fight serves as McGregor’s highly anticipated return to the octagon after 14 months, while Cerrone receives the biggest opportunity of his nearly 14-year career. As part of an occasional series ahead of the matchup, let’s flash back to a UFC 189 pre-fight scrum, where McGregor refused to adhere to comparisons to any other fighters.

There’s only one Conor McGregor. Most everyone can agree on that.

Throughout his career, the brash Irishman has been put in the same light as many others over combat sports history. He’s never embraced any of those comparisons, though, and always remained firm in his stance that he’s his own entity.

He never made his belief more clear than ahead of his scheduled UFC 189 title fight with Jose Aldo (which eventually turned into an interim title bout vs. Chad Mendes after Aldo suffered an injury on short notice).

A Brazilian reporter asked McGregor if he’s “the new Chael Sonnen,” and he adamantly shut down that statement. 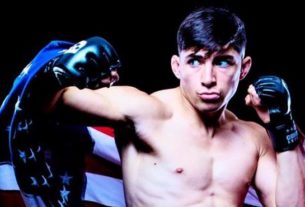