Watch Conor McGregor, Donald “Cowboy” Cerrone and the rest of the UFC 246 fighters weigh-in at Friday’s ceremonial weigh-in at the Park Theater in Las Vegas.

Main eventers Conor McGregor and Donald “Cowboy” Cerrone have been fighting at lightweight most recently, so they weren’t expected to have any issues making weight for their five-round welterweight main event. Neither fighter had any trouble.

The UFC 246 fight card is topped by former dual-division champion Conor McGregor’s return to the Octagon after more than a year on the sidelines. He squares off with Donald “Cowboy” Cerrone in a five-round welterweight headliner.

Tune in to MMAWeekly.com for full UFC 246: McGregor vs. Cowboy Live Results on Saturday, January 18, 2020, from T-Mobile Arena in Las Vegas. 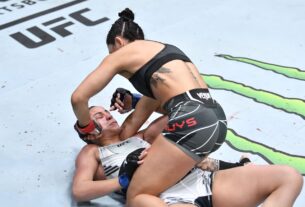 Everything That Happened At UFC Vegas 33 Last Night