Here’s EVERYTHING That Happened At UFC ‘Raleigh!’

Ultimate Fighting Championship (UFC) made its presence known to PNC Arena in Raleigh, North Carolina, last night (Sat., Jan. 25, 2020) for UFC Fight Night 166. How did UFC “Raleigh” stack up to the many other “Fight Night” events that filled up most of our Saturday nights? Probably right in the middle. The clash of big boys in the main event promised some thrills, and the rest of the event showcased some decent prospects and scrappy veterans.

Let’s take a closer look at the best techniques and performances of the night:

More Than A Wrestler

Curtis Blaydes didn’t land a single takedown last night, but he still defeated Junior dos Santos. Most expected Blaydes to win, but few would have guessed that specific outcome.

That’s not to say Blaydes’ wrestling didn’t help or was unimportant. Blaydes showed excellent and continued growth on his feet, moving better than ever and using the threat of the takedown to set up strikes. On several occasions, Blaydes drove forward with a shot, was stuffed, but managed to land a follow up knee or jab on the break. That’s a great exchange for him, a free strike on a dangerous boxer.

Due to his frequent wrestling, it can be easy to forget about Blaydes’ massive 80 inch reach. His jab was more effective than in previous contests, but the right hand proved the difference maker. Dos Santos was really trying to show uppercut — another effect of Blaydes’ wrestling threat — but he did not have his usual length advantage. The cross is a much faster and longer weapon than the uppercut, and that’s an exchange Blaydes capitalized upon frequently. In the second round, one such right hand landed perfectly for “Razor,” causing dos Santos to stumble around without any real support from his legs. Blaydes pursued him with real ferocity, forcing the finish and ending any thoughts that Blaydes is a win-by-decision type athlete.

Michael Chiesa has been on the UFC roster since 2012 and fought a lot of tough guys in that time period, names like Jorge Masvidal, Al Iaquinta, and Anthony Pettis. An over-sized Lightweight until recently, Chiesa routinely faltered against that division’s upper echelon, as his conditioning would fail him in the latter half of the fight.

Against a fellow former Lightweight — and a champion at that! — in Rafael dos Anjos, he seemed destined for a similar outcome. Beating the 2019-versions of Carlos Condit and Diego Sanchez is one thing, but “RDA” entered this bout ranked in the top five, fresh off fights with the absolute elite of 170 lbs.

Instead, Chiesa proved that the weight cut was indeed hampering him. His striking may remain a bit awkward, but Chiesa was effectively able to force a grappling match for most of the fight. Size was no issue for “Maverick,” who was better able to control dos Anjos than most of the Brazilians past foes. Most importantly, Chiesa rallied hard in the third, overcoming a competitive second round to clearly take the final five minutes and thus the victory.

It’s the biggest win of Chiesa’s career, a great performance, and proof that Welterweight is the correct home for him.

The bout began about as expected, as Espinosa showed off his speed from the outside, looking to burst forward with quick strikes. Perez prefers to bully opponents, and he attempted to do just that, stalking his foe around the Octagon and pressuring with combinations. Before long, Perez was able to trap his foe against the fence, wrap up a body lock, and break his opponent down to the mat.

A minute later, the bout was over. Perez was in the half guard and locked up the beginning of an arm triangle, using the position to work for a pass. When Espinosa clung tight to half guard, Perez adapted his approach, dropping a massive amount of shoulder pressure into his foe’s neck. Despite the position, Perez’s method of finishing was a lot closer to the type of pressure required by a Von Flue choke.

Espinosa blacked out! It was veteran work from Perez, a smart tactic by a man who clearly knows all about squeezing necks.

Cynthia Calvillo: Jessica Eye ‘held on to the towel,’ missed weight by more than .25 pounds 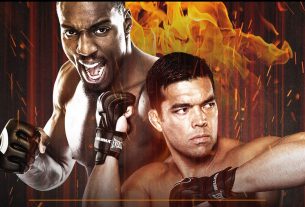