Adesanya: Jones Fight Will Go Down At Raiders Stadium, July 2021

‘The Last Stylebender’ is creating quite the future for himself, setting up a 2021 bout with Jon Jones at Allegiant Stadium for International Fight Week 2021.

Light heavyweight champ and GOAT contender Jon Jones has gone back and forth on fighting middleweight champion Israel Adesanya in the future. Sometimes he’s down. Other times, he’s dismissive. This week during UFC 247 fight week, he kept things pretty dismissive.

“Honestly, I have no interest in Israel, at the end of the day,” Jones said (via MMA Fighting). “It’s like, my career isn’t based around fighting him. Him to fight me, it would be huge for his resume. But for me, I feel like I already have so many legends under my resume but he’s not even a legend.”

At the UFC 248 press conference featuring headliners Adesanya and his title challenger Yoel Romero, the press asked if Israel felt he ‘needed’ to fight Jones.

Raiders Stadium is, of course, the upcoming Allegiant Stadium which is set to start holding games and events on July 31st, 2020. Conor McGregor said following his win over Donald Cerrone that he’d love to be the man to cut the MMA ribbon on that building, so to speak. And it sounds like Israel Adesanya would also like a shot at filling up the 61,000 capacity building. Against Jon Jones on International Fight Week? We think they could definitely do it.

That wasn’t all Adesanya had to say regarding “Bones” … another reporter tried to follow up on that stunning date declaration, but “Stylebender” shut him down forcefully before he could even get his question out.

”F**k Jon Jones, this is about UFC 248,” Adesanya declared. “Enough of that motherf**ker. That pulsing pico pussy. That mighty pulsing power picto roidhead. F**k that c**t. We’re done with him. Next question.”

UFC 248 goes down March 7th from the T-Mobile Arena in Las Vegas, Nevada. 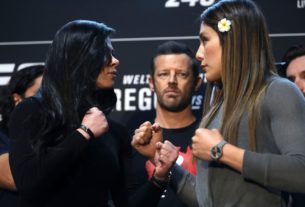