Katlyn Chookagian is full of confidence heading into her first UFC title fight.

In the co-main event of UFC 247, Chookagian will take on current flyweight champion, Valentina Shevchenko and will do so as a massive underdog. She is hovering around +700. But, that isn’t slowing her confidence, as she says she is better everywhere than ‘The Bullet’ and will dominate Saturday’s fight.

“Obviously I’m going to hear And New, that is the goal,” Chookagian said to TMZ Sports. “I see this going, decision, submission, some type of finish. No matter where it goes, I’m better than her standing and on the ground. So wherever it goes I’m gonna be dominant.”

If Katlyn Chookagian does get her hand raised she says she would think about moving back up to 135lbs to fight for the belt. Before flyweight was a division, the 31-year-old fought at bantamweight and beat the likes of Irene Aldana, and Mara Romero Borella. So, she knows she is capable of competing well at 135lbs.

“I start thinking about champ-champ when I start eating after the fight. You know, going up is pretty up. To win two [titles] is pretty nice… The good thing is I’ve fought at 135. So, you know, I’ve fought there before and I’ve won and feel comfortable,” she explained. “125 I feel like a killer and feel bigger. But, 135 I’ve fought there before and I’m comfortable there so, [after I] win this fight I would definitely consider going up.”

Although Katlyn Chookagian said she is comfortable at bantamweight, she would only move up to fight the champ and that is Amanda Nunes. She also believes she’d be one of the promotions top bantamweights, as she already beat Aldana, who may be getting the next title shot against Nunes.

“Whoever is the champ at ’35. If I go up to ’35 it is to fight for the title. So, whoever is the champ there I’m down to fight. I know she [Nunes] might fight Irene Aldana, they’re talking about her,” she said. “She just came off a good win and I beat her with a torn labrum so I’m right in the mix with those girls.”

Do you think Katlyn Chookagian will dominate Valentina Shevchenko at UFC 247 as she says? And if she does, would you be interested in seeing her fight Amanda Nunes? 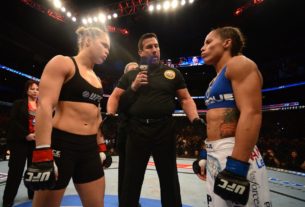