Jones (25-1 MMA) will be returning to the Octagon for the first time since July’s UFC 239 event in Las Vegas, where he etched out a split decision victory over Thiago Santos.

‘Bones’ reclaimed the UFC’s coveted light heavyweight title at UFC 232 in December of 2018, defeating Alexander Gustafsson by way of third round knockout.

Jon Jones will now look to defend his title against the divisions hottest contender in Dominick Reyes (12-0 MMA).

‘The Devastator’ earned a first round knockout victory over former middleweight title holder Chris Weidman in his most recent effort. Reyes also holds wins over Volkan Oezdemir, Ovince Saint Preux and Jared Cannonier during his time with the promotion

Round one of the UFC 247 main event begins and Dominick Reyes comes out with a big left hand after faking the glove touch. After a brief clinch the fighters break and Reyes throws a combination. Reyes with a good low kick and then another. He attempts to go high but misses. Jon Jones answers with a pair of low kicks of his own. Reyes lands a nice combination that forces Jones back. Hard left hand drops Jones. ‘Bones’ is right back up, but Reyes is all over him. Jones retreats to the fence as Reyes unloads to the body. Hard body kick from Reyes and a left hand. Jones goes to the body himself. Reyes answers and then fires off a head kick. ‘Bones’ seems perplexed in there. Reyes with another low kick. Jones pressures forward. He misses with a front kick but lands a slapping high kick behind it. Another high kicks lands for Jones before the horn sounds to end round one.

@DomReyes puts the champion down early in R1! #UFC247 pic.twitter.com/rYykH9nPQb

Round two of the UFC 247 main event begins and Jon Jones looks to come forward early. Dominick Reyes lands a snapping jab. He is out-boxing ‘Bones’ at the moment. A low kick from Reyes stumbles Jones. The champion continues to apply pressure but eats a left hook for his efforts. A body kick connects for Jones but Reyes swarms him with punches. Body kick from Reyes, and then a low kick. Jon Jones is throwing side kicks to the thigh. Reyes throws a low kick and Jones lands the left hook counter. Left to the body from Reyes followed by an uppercut. Jones with a nice left hook. Reyes throws a hook to the body. Jones continues to walk him down and lands a front kick. Reyes throws a left. A right hand lands for Jones. Reyes jabs to the body. Hard jab from Jon Jones. A body kick from Reyes. Jones side steps and lands a nice combination. Reyes fires back with a jab. Jones with a low kick and then another. A good uppercut lands for Reyes. The horn sounds to end round two.

Round three begins and Jon Jones starts things off with a low kick followed by a front kick to the body. Reyes with a head kick. Nice uppercut and knee from Reyes. Jones pushing forward with a jab to the thigh. Reyes rips the body but Jones counters with a right hand. Reyes just misses a head kick on the exit. Low kicks from Reyes now as Jones attempts to force the action. ‘Bones’ with a hard right hand. Reyes lands an uppercut. Jones with a high kick that lands. He shoots in and gets the hips but Reyes defends and lands an elbow off the break. Left hook lands for Jones. Reyes returns fire with a hard body kick. Jones comes back with a jab and then a jumping kick. The horn sounds to end round three.

Round four of the UFC 247 main event begins and Dominick Reyes lands a hard low kick. Jones forces the clinch and scores a takedown. Reyes is right back up but ‘Bones’ puts him right back down. Dominick gets right back to his feet again and the crowd is stunned. Reyes with a nice left. Jones with an inside low kick. He shoots for a takedown but Reyes once again seems to defend with relative ease. A body shot lands for Reyes and Jones fires off another hard low kick. Another low kick from Jones is answered by a right hook from Dominick Reyes. Jon Jones with a left hook and then one to the body. Reyes attempts to answer but Jones connects with a body-head combination. Another looping right lands for Jones. The horn sounds to end round four.

The fifth and final round of the UFC 247 main event begins and Reyes out with a hard left hand, and another. Jones is pressing, Reyes goes to the body. Low kick from Reyes. Jones diving for the double and he’s got this one. Reyes get right back to his feet. Good combinations from both men. Jon Jones with a low kick and then a hard left hook. Kick to the body for ‘Bones’. He is definitely winning this last round. Reyes with a combination. Jones continues to push forward. Side kick to the body from Jones. He lands a low kick and then a left to end the fight.

Who would you like to see Jon Jones fight next following his decision victory over Dominick Reyes at tonight’s UFC 247 event in Houston? Sound off in the comments section PENN Nation!

Stay glued to this site for all of your mixed martial arts news!

Jorge Masvidal open to Ben Askren rematch down the line 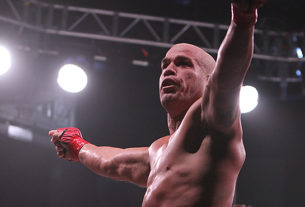 Tito Ortiz not looking past Alberto El Patron, but has a roadmap to the next three years with Combate Americas