The Kanas Athletic Commission announced on Monday it will give MMA promotions the option for open scoring, and Invicta FC has taken them up on the offer.

In the wake of UFC 247, which featured several controversial judges’ scoring decisions including the heavily-debated main event scorecard between UFC light heavyweight champion Jon Jones and challenger Dominick Reyes, there has been chatter all over MMA circle about the sport adopting open scoring. Instead of the judges’ scorecards being a surprise to everyone at the end of the fight, with open scoring the fighters would see what the scores are in the fight during it. That will soon come to Invicta FC.

The Kansas Athletic Commission thinks there is some merit to open scoring and is going to allow MMA promotions to use it, and Invicta FC, the all-women MMA promotion, will be the first to do so. Here’s what Kansas boxing commissioner Adam Roorbach told ESPN about the open scoring system.

“Beginning March 1, the KAC will offer MMA promoters (including Invicta FC) the option for “real-time” scoring, Kansas boxing commissioner Adam Roorbach told ESPN on Monday. After every round, the score of the fight will become public knowledge — told to the fighters’ corners, the broadcast team and the fans in attendance. Currently in MMA, the scores are read only at the conclusion of a bout that goes the distance. Roorbach said the use of real-time scoring is up to the promoter and the commission will be flexible to the promoter’s desires. It doesn’t have to be used at all; it can be used for some fights and not others; and the scoring information can be given only to select people in between rounds.”

“If we can help in some way to push the sport forward in a positive direction, that’s what we’re about, we’ll try,” Knapp said of Invicta FC adopting open scoring.

Open scoring is not a new concept as even GLORY kickboxing uses it. However, it is mostly foreign to MMA and its adoption by Invicta will be interesting. As much as a fighter knowing they are down on the cards might motivate them to leave everything in the cage, on the flip side if a fighter knows they are up big they may coast. It will certainly be intriguing to see how this works out for Invicta FC.

What do you think about Invicta FC trying out open scoring? 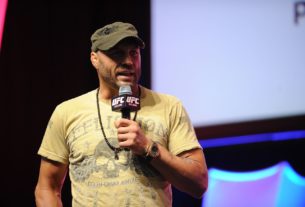 Kevin Lee declares himself the ‘uncrowned champion’ of the lightweight division