Jessica Eye asks UFC for ‘another chance’ against Valentina Shevchenko

Jessica Eye has called for a rematch with Valentina Shevchenko.

After Shevchenko beat Katlyn Chookagian at UFC 247, Eye took to Twitter to ask the UFC for another crack at the champ. Eye, of course, got the title shot against Shevchenko at UFC 238, but ultimately suffered a second-round knockout loss by a head kick. Still, Eye believes she could do better and wants a rematch.

Please give me another chance @ufc

“Please give me another chance @ufc,” Jessica Eye tweeted.

Jessica Eye was a massive underdog for the fight as she closed as a +750 underdog but was as high as +800 on some sportsbooks. The knockout was a highlight reel one, which Eye has since said she made a couple of mistakes which has cost her the fight.

Since the loss to Shevchenko returned at UFC 245 against a surging contender in Viviane Araujo where Eye got the job done by unanimous decision but missed weight. In her UFC career at flyweight, she is 4-1 with wins a notable wins over Chookagian.

Eye currently does not have a fight booked, but it seems unlikely she would get a rematch against Shevchenko. But, she may very well be just one or two wins away from getting another chance. When she will return to the Octagon remains to be seen.

Valentina Shevchenko, meanwhile, has now defended her belt three times as Eye was her first title defense. Since then, she beat Liz Carmouche by decision and then TKO’d Chookagian. Many have made it known they would like to see Shevchenko vs. Amanda Nunes 3, as both champions are running out of contenders. But, it seems unlikely that will happen next as even ‘The Golden Bullet’ said she eyes opponents like Joanna Calderwood, Roxanne Modafferi, or Jennifer Maia next.

Would you be interested in seeing Jessica Eye vs. Valentina Shevchenko 2? Sound off in the comment section, PENN Nation!

The post Jessica Eye asks UFC for ‘another chance’ against Valentina Shevchenko appeared first on | BJPenn.com. 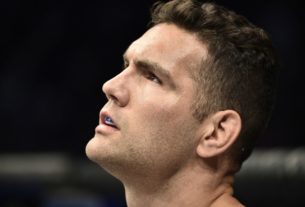