Jon Jones after reviewing UFC 247 film: ‘We are confident in our victory’

Upon further review, Jon Jones is confident he was the rightful winner at UFC 247.

Jones’ unanimous decision victory over Dominick Reyes to defend his light heavyweight title in this past Saturday’s headliner was marred with controversy, as many believe the belt should’ve changed hands.

Jones (26-1 MMA, 20-1 UFC) admitted immediately after the fight that he couldn’t be certain of how everything unfolded and would only know for sure after reviewing the tape. Jones called a coaches meeting with his Jackson Wink MMA team on Monday, and after watching it back, believes he deserved the win over Reyes (12-1 MMA, 6-1 UFC).

“Just finished re-watching UFC 247 with the coaches, we are confident in our victory,” Jones wrote on Instagram, along with the hashtags #AndStill and #EarnedNotGiven.

Just finished re-watching #UFC247 with the coaches, we are confident in our victory. #AndStill #EarnedNotGiven

Just finished re-watching #UFC247 with the coaches, we are confident in our victory. #AndStill #EarnedNotGiven

Jones didn’t delve into details about exactly why he deserved the win. The common belief is that he took the fourth and fifth rounds convincingly, while the first definitely went to Reyes, and the second and third were up for interpretation.

Nevertheless, Jones emerged from UFC 247 in Houston with his hand raised and the owner of a new record for most championship-fight victories in UFC history.

Dominick Reyes in disbelief over UFC 247 judging: ‘You’re going to do me like that?’

Jon Jones after reviewing UFC 247 film: 'We are confident in our victory'

Rolling deep: Ray Cooper III ready to reward those around him with PFL 2019 title 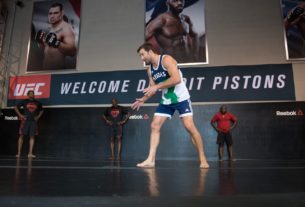 Rockhold Vs Rodriguez Set For Nov. 30 In Newport