Jury (19-5 MMA, 1-1 BMMA) snapped a three-fight losing skid and registered his first victory since December 2017 when he outworked Girtz (16-9 MMA, 8-7 BMMA) to a unanimous decision in a largely uneventful contest.

The lightweight bout was the Bellator 239 co-main event at WinStar World Casino in Thackerville, Okla. The main card aired on Paramount and streamed on DAZN following prelims on MMA Junkie.

Girtz wasted little time pressing the action on Jury and landing some solid strikes in the opening minute of the fight. Jury worked behind his jab and tried to stay on the outside as the most aggressive Girtz did his best to close the distance. There was mixed success from both sides, but neither man was able to do anything to badly hurt the other and overtake momentum coming out of the round.

The beginning of the second frame was a different story, however, because Girtz was able to get inside Jury’s range within the first minute and secure a takedown. He spent the next several minutes there, inflicting minimal damage but burning clock and controlling Jury, who seemed content on bottom, from inside the guard. The referee didn’t enjoy it, though, and intervened with a standup with a little more than 90 seconds remaining.

Moments after, Jury poked Girtz in the eye, forcing another break in the action. Once the fight resumed, Jury got a grappling advantage when he took Girtz’s back from a standing position near the fence. Unfortunately, there was short time and he couldn’t get into a fight-finishing position.

With the fight potentially up for grabs going into the final frame, both men looked to force their strategy. Girtz used his forward movement and pressure to attack with big strikes, but he had trouble hurting Jury, who was content to counter with his boxing. Jury secured a takedown in the late stages of the round and took the back again, but he couldn’t finish the fight and left the result to the judges.

In the end, the judges ruled it in favor of Jury.

“I feel like I’m a counter fighter, and this time I had to break in and bring out the dog a little bit,” Jury said during his post-fight interview. “First win finally in Bellator. What do I want next? I want a title shot, I want a new contract and I want a little gig in the side of the booth with you here, ‘Big John.’” 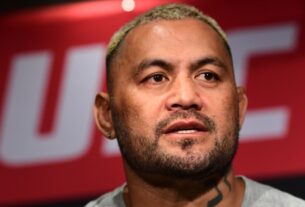