Ryan Hall reveals that all fighters ranked 6 through 12 at featherweight have turned him down.

Hall has not fought since he beat Darren Elkins by decision at UFC Sacramento last July in a fight he dominated. Before that, he submitted former two division UFC champion B.J. Penn in his only fight of 2018. The jiu-jitsu wizard is an Ultimate Fighter winner and says his skill set has resulted in opponents turning him down.

“It’s been a little bit of a struggle to find an opponent. I’ve been directly turned down or been told that they’re unavailable from 12 all the way down to 6,” Ryan Hall said on Ariel Helwani’s MMA Show. “That would be [Shane] Burgos, [Jose] Aldo, [Josh] Emmett, [Jeremy] Stephens, [Renato] Moicano, Frankie [Edgar] and [Calvin] Kattar. Pretty much everyone down to about Korean Zombie or Yair Rodriguez has been unavailable.”

Part of the reason why Hall has been unable to fight ranked opponents is the fact that three fighters in the top-10 are no longer fighting in the weight class.

“Edgar, Aldo, and Moicano, all of whom are very tough guys, are holding spots in a division they’re not currently competing in. It just seems like there’s a bit of a logjam that’s difficult to deal with.”

Although Ryan Hall is hoping to fight a ranked opponent, he just wants to fight. Pedro Munhoz recently called him out and Hall seemed interested. Unfortunately for both men, the UFC didn’t show the same interest.

For now, Hall is sitting on the sidelines waiting for someone to sign the contract to fight him.

“Pedro Munhoz really wanted to fight, and I really appreciated that. Unfortunately, I guess the UFC wasn’t super interested in letting a cross-weight class fight take place in that case “I’m not asking to fight the No. 1 guy in the division, I wouldn’t do that,” Ryan Hall said. “The only reason that I find myself looking at the No. 5, 6, 7 guys is that everyone in between me and them has said no … I don’t believe that I have some right to fight Frankie Edgar, to fight Brian Ortega or anything like that. They’ve done things that I’ve not done in the sport. However, I find myself in a situation where I’m not sure what else to do, because no one else will accept the fight.”

What do you make of Ryan Hall saying everyone ranked six to 12 has turned him down? Sound off in the comment section, PENN Nation!

The post Ryan Hall reveals everyone ranked 6 to 12 at featherweight has turned him down appeared first on | BJPenn.com.

Dana White: Daniel Cormier has been offered other fights, but is set on Miocic trilogy 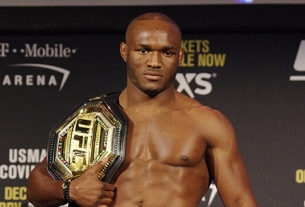