It seems Ultimate Fighting Championship (UFC) president, Dana White, has just run into another hurdle in his efforts to stage UFC 249 on April 18. According to a report from Reuters, Russia is grounding all flights starting on March 27.

Khabib Nurmagomedov recently packed up his bags and took his training camp from San Jose, Calif., to Russia due to the ongoing lockdowns all over the country. And it proves to be bad timing, as now Vladimir Putin is ready to do the same.

“President Vladimir Putin said on Thursday he hoped Russia would defeat coronavirus in 2-3 months if it imposed tough measures, as authorities suspended international flights, ordered most shops in the capital to shut and halted some church services,” said the report.

“Authorities in the capital and the region that surrounds it announced the closure of all cafes, restaurants and shops, apart from those selling food and medicine, beginning on Saturday and lasting at least until April 5.”

That said, flights will be allowed on a government-approved basis.

“Under the airline restrictions, Russian flights will still be allowed to fly to other countries to bring Russian citizens back or if they are authorized by special government decisions, the government said on its website.”

Of course, should the ban be lifted by April 5, it gives Khabib and Co. a little under two weeks to fly out to make the fight against Tony Ferguson, if it does indeed go down. At the moment, White has been very tight-lipped about where the lightweight title bout will take place, though it seems Florida is the leading candidate.

Nevertheless, White is determined to make this fight happen even in the face of a worldwide pandemic. But as the days go by, the odds just keep stacking up against him.

With win at UFC 244, Gregor Gillespie will call for Khabib Nurmagomedov fight

VIDEO | Yoshihiro Akiyama picks up highlight reel KO at ONE: King of the Jungle 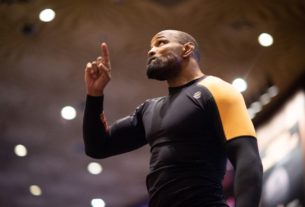