Khabib Nurmagomedov is still stuck in Russia, and the chances of his scheduled lightweight title fight against Tony Ferguson — which is set for UFC 249 on April 18 — going down are growing slimmer by the day.

Vladimir Putin grounded international flights to and from Russia just a few days after “The Eagle” landed in his home country to continue his training due to the ongoing lockdowns in the United States due to COVID-19.

And to say Ferguson was disappointed by the whole situation is an understatement, as he took to social media to slam Khabib for once again looking for a way out.

“April 18 Is Getting Close @TeamKhabib & You’re Hiding In Russia. Travel Bans Will Not Prevent Me From Whoopin’ That Ass,” said Ferguson. “Don’t Use It As An Excuse To Back Out. You Have Been Sent Many Locations, Send Us 1. Still My Bitch.”

But the show must go on, as Dana White and Co. are still determined to deliver one of the biggest cards of the year in the face of a worldwide pandemic, with or without Khabib. Several fighters have thrown their name in to fill the void, including Dustin Poirier, Kamaru Usman, Tyron Woodley and Colby Covington.

The most likely option, it seems, is pitting Ferguson against Justin Gaethje, but that is far from a done deal at the moment. Of course, the promotion could always postpone UFC 249 a few more months, but at this point it seems Dana White might be thinking he’s gone too far to pull the plug now.

Matchup Roundup: New UFC and Bellator fights announced in the past week (May 18-24) 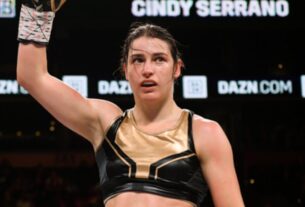