When Daniel Cormier looks back on his second fight with Stipe Miocic, his thoughts are crystal clear.

Cormier and Miocic have split results over two meetings in July 2018 and August 2019. Both have claimed a knockout win to force the UFC heavyweight title to change hands, setting the table for a final clash to be determined.

Cormier admitted that he recently watched his UFC 241 loss to Miocic for the first time in starting his preparation for the third meeting. It’s a fight Cormier was winning until Miocic made a strategic adjustment to attack the body, setting up his knockout win in the fourth round.

Even in the immediate aftermath of the fight, Cormier was well aware of where and how his flaws were exposed. Despite the mixed results, Cormier believes one thing to be true.

“I’m a better fighter than Stipe Miocic,” Cormier said on the “DC & Helwani” podcast on ESPN. “I respect him, I think he’s a great guy, I think he’s a great role model, but I’m better than him. I just want to go prove it. I should’ve never lost to him. That is going to be one of my greatest regrets.

“I lost to (Jon) Jones, but he was better. Stipe Miocic is not better than me, and that’s going to be something I regret for the rest of my life, is letting him get a victory over me. It should’ve never happened.”

Cormier (22-2 MMA, 11-2 UFC) is getting impatient waiting for Miocic (19-3 MMA, 13-3 UFC) to make their trilogy fight official. Before the coronavirus pandemic hit, all signs pointed to an August date, potentially in San Francisco. Everything has changed amid the crisis, though, and Cormier has said he’d be fine closing his career and rivalry with Miocic in an empty arena.

The issue is that he can’t get a commitment from the other side, as Miocic has kept a nonchalant attitude. Cormier, meanwhile, said he’s already preparing for the fight to happen. He understands Miocic is focused on his other job as a firefighter and working on the front lines to battle COVID-19, but his patience is wearing thin.

“Sign the contract,” Cormier said bluntly. “What are you doing?”

Cormier criticized Miocic for not pushing harder to get the fight done, especially considering the magnitude of the contest. An argument can be made the trilogy is shaping up to be among the best in UFC history, and Cormier said it’s time to take advantage.

What could’ve been: 10 of the best booked UFC fights that never happened 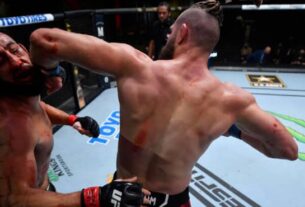