Coming into 2020, heavyweight Brett Martin had built up a five-fight winning streak and was looking to take his step to the next level of his career when his plans were put on hold due to the novel coronavirus.

When lockdown was enacted, Martin was already in the midst of preparations for his first bout of the year versus Tony Lopez for Big John’s MMA.

“I was scheduled to fight on March 28, so I was six weeks into my camp, getting into the guts of the camp, and just getting ready to have a fight,” Martin told MMAWeekly.com. “When they started cancelling things like the Arnold (Classic) right before my fight, I kind of had reached out to my manager and told him I highly doubted there was a way for this fight to go through.

“If (the fight) was live on TV or PPV, maybe they could try to pull it off, but I kind of had the knowledge a week and a half, two weeks, before the fight that it wasn’t going to happen.”

While his progress has been halted for now, Martin isn’t letting it deter him from keeping the same goals he’s had since day one.

“At the level I’m at, I’ve been told for a while that my next step is the UFC or one of the other promotions,” said Martin. “After every fight that’s what I’m waiting to hear, hopefully that time comes soon regardless of what’s going on.

“It’s the same what I’ve been doing the last year, year and a half, just going out there and doing my best to keep winning.”

With the lockdown closing gyms for the most part, Martin has gone back to adopting the same Spartan training style he did before turning pro in order to keep himself as ready as possible for a return.

“Right now it’s kind of like when I was an amateur,” Martin said. “I did my whole amateur career without any kind of coaches or any kind of work at the gym. I was just a college wrestler who fought fights through a friend.

“I took fights and did as much cardio and bag work (as I could). I had a couple buddies that I hit mitts and stuff with, and that’s basically what it is now. Getting in work with guys that I know as we can, staying as safe as possible, and hopefully get back to these fights and enjoying what we like to do.”

When he is able to fight again, Martin wants to make that move up to the next level before the end of the year if possible, but he’s willing to be patient if he has to be.

“In my mind right now I see the UFC and some of these bigger organizations being the only ones to put on shows because they can pull off these live events on television. I think regionally we’re going to be kind of sitting on the bench for a little while,” said Martin.

“I have one of the best resumes in the country, so if the UFC is doing the Contender Series, I’d be shocked to not get a call this year. I thought I deserved it last year, let alone what I did last year. It would be crazy for me to not be at that level if I keep doing what I’m doing.”

Dustin Poirier hoping for another title shot by year’s end 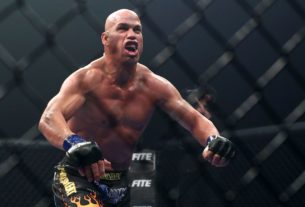