According to Emmett, he tore his ACL in the first 15 seconds of the fight.

Josh Emmett picked up a huge win last Sat. night (June 20, 2020) at UFC on ESPN 11, defeating Shane Burgos in a back-and-forth thriller that earned both men praise from their colleagues and a nice $50,000 bonus check from the promotion (highlights).

But it didn’t come without a price. According to ESPN, Emmett suffered a completely torn ACL, as well as a partially torn MCL, focal impact fracture of femur, as well as damaged cartilage. Emmett then took to social media to confirm the entire laundry list of the medical injuries he suffered in victory.

He ended his post with an inspiring caption that read, “When I say I’m willing to go through HELL and suffer any amount of pain to get my hand raised, I mean it!”

The injuries will likely require surgery and could keep the hard-hitting Featherweight on the shelf most likely for the remainder of 2020, and even the first quarter of 2021 if he goes under the knife.

Per his manager, Jennifer Goldstein, there is a possibility that Emmett could forego surgery.

It’s a tough blow for Emmett, who was well on his way for a surge on the official UFC rankings, getting him ever-so-close to a bigger fight on his path to chasing the division strap.

Emmett suffered the injuries in the very first round, but still went on to put on a great performance against a rather tough opponent on one leg. Emmett is 5-1 over his last six UFC fights, scoring huge wins over Ricardo Lamas and Michael Johnson along the way, including two consecutive post-fight bonus winning performances.

Now, Josh begins his long road to recovery before he can mount a comeback. 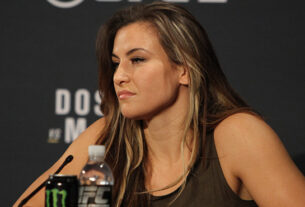