Skip to content
Brits are back: 5 matchups to follow as U.K. fighters take over UFC ‘Fight Island’

The launch of the UFC’s “Fight Island” events in Abu Dhabi next month marks the moment for a group of fighters from the international roster to return to action.

That group includes a host of U.K.-based fighters who, up to now, have been in MMA exile while international travel restrictions keep them from traveling to the U.S. to compete.

The advent of “Fight Island” and the UFC’s detailed travel regimen for fighters jetting into Abu Dhabi have opened the door for some of the promotion’s most exciting fighters from the U.K. to return to action.

Ahead of the UFC’s four-event run on Yas Island, here are five fights to keep an eye on that feature returning U.K. fighters.

There’s been something special about some of the matchups we’ve seen during the UFC’s lockdown era so far, and you can bet your last dollar (or British pound) that Molly McCann will look to add to that growing list of memorable fights.

McCann (10-2 MMA, 3-1 UFC) arrived in the UFC as the Cage Warriors women’s flyweight champion, but was submitted by Gillian Robertson on her debut in her hometown of Liverpool. But since that defeat McCann has bounced back superbly with a trio of unanimous decision victories over Priscilla Cachoeira, Ariane Lipski and Diana Belbita.

“Meatball” is getting better with every fight, and will be keen to show her latest improvements against Contender Series graduate Talia Santos (15-1 MMA, 0-1 UFC), who is bidding to claim her maiden UFC victory after suffering her first career defeat on her UFC debut against Mara Romero Borella.

The fight represents the toughest assignment of McCann’s UFC career since her debut, but a fourth straight win for the energetic Evertonian will push the 30-year-old toward the division’s big names later in 2020.

Next up: Striking aces get ready to throw down

Brits are back: 5 matchups to follow as U.K. fighters take over UFC 'Fight Island' 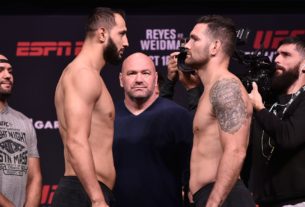