Ferguson Will Whoop Poirier (Or McGregor) To Earn Next Title Shot

Fortunately for “El Cucuy,” he’s built up enough equity over the last few years to keep himself at the precipice of title contention, and believes a high-profile victory over top contender Dustin Poirier — or even ex-champion Conor McGregor — is enough to seal the deal.

“You want to give me Conor, you give me Conor. You want to give me Poirier, we’ll make it happen, and then we’ll fight for the winner of the Gaethje and Khabib fight,” Poirier told ESPN (via MMA Junkie). “I would love to compete against Khabib, Poirier, McGregor. Those are the three right there. Why? Talent-wise, that’s why. Not because of any other ways or means. Because of the talent and the athletic respect that I have for their talent that they have in this sport.”

Ferguson (25-4) won 12 straight fights at 155 pounds — with nine finishes — before getting stopped by Gaethje, a heartbreaking loss that served as yet another obstacle to his long-awaited showdown against reigning lightweight champion Khabib Nurmagomedov.

Speaking of the undefeated “Eagle,” he’s charged with getting past Gaethje in the promotion’s championship headliner on Oct. 24, which may (or may not) set up a long-awaited showdown against “El Cucuy,” depending on how the next few months play out. 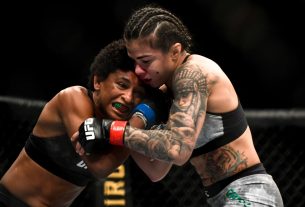