What happens when you bring two opposing MMA coaches together to talk about how they tried to outsmart each other? That’s what this is all about.

Earlier this month, UFC on ESPN 14 gave fans a main event that was both technical and grueling in its own way as Calvin Kattar overcame a game Dan Ige to win a unanimous decision.

The first three rounds were tightly contested, but Kattar had more gas left in the tank during the championship rounds and pulled away, with the judges awarding him scores of 49-46, 49-46 and 48-47.

On that morning in Abu Dhabi, Kattar had New England Cartel coach Tyson Chartier in his corner. Ige, meanwhile, competed in his first UFC headliner under the tutelage of Xtreme Couture’s Eric Nicksick.

MMA Junkie Radio host Brian “Goze” Garcia brought Chartier and Nicksick together to dissect the fight and pick each other’s brain on strategy throughout the five rounds. And by the end of it, they share a moment of mutual respect.

You can watch it all in the video above. 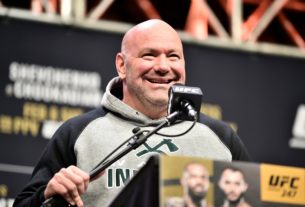 Curtis Blaydes puts fans on notice: “If y’all were hoping to see a 25-min stand-up war you probably shouldn’t tune in”