Mokaev, a two-time IMMAF junior world champion and two-time European champion, has a perfect amateur record of 23-0 and will make his pro debut against Northern Ireland’s Glenn McVeigh on Saturday at Brave CF 37.

Mokaev had numerous opponents drop out before McVeigh made his pitch on social media by calling the Dagestan-born, Manchester-based fighter a “bum.”

The pair have history together, with McVeigh claiming that he’s been calling out Mokaev for years, but the fight never came to fruition. The two finally came face to face when they touched down in Stockholm and had to be separated on multiple occasions.

Things are getting heated

They first got into a heated altercation at the hotel on Thursday and tensions continued to rise at Friday’s weigh-ins morning.

Tensions are high! Muhammad Mokaev and Glenn McVeigh were ready to go! One more day for #BRAVECF37

Mokaev is widely considered to be one of the most talented amateur fighters to come through the IMMAF ranks, and the bad blood between him and his opponent has only served to raise the anticipation level ahead of his debut on Saturday. 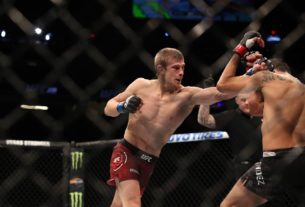